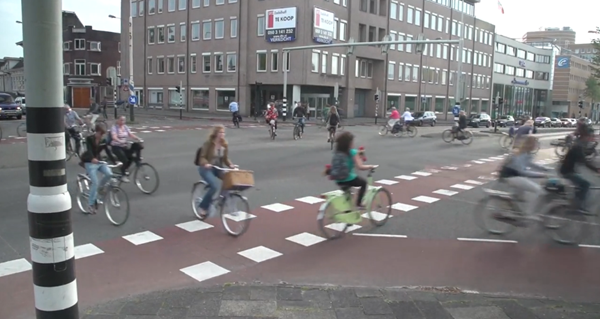 Clarence Eckerson Jr. from Streetfilms recently took a trip to Groningen, Netherlands and documented its widespread bicycle culture in a wonderful 15 minute film.

Groningen, a city of about 192,000 people has the highest mode share of bicycle users of anywhere in the world. 50% of all trips in Groningen are done by bike. That number rises to just under 60% in the city centre.

David Hembrow, from A View From the Cycle Path blog, appears in the film and discusses how good design makes for pleasant bicycling in Groningen:

“If you’re making a journey inside the city, then you can start and finish in a different part in the city and take a direct line between the two. But if you go by car, you have to take a detour.

This is not really an anti-car measure. What this is is making the neighbourhoods where people live more pleasant. And making cycling into a viable option.” 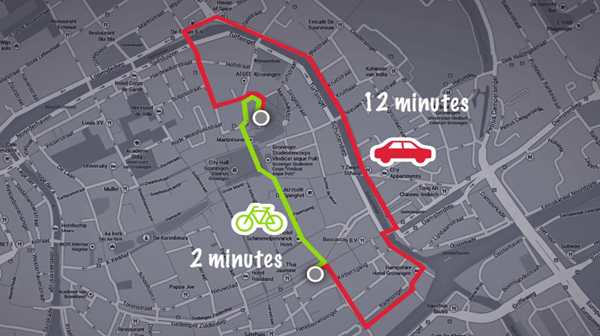 “And everyone said, it can’t work. This is impossible. The shopkeepers said ‘we’ll leave the city immediately. No. Everyone must park right in front of our doors, otherwise we will lose all of our business.” And then wonder wonders, the world didn’t collapse. The shops didn’t leave the city. The police found, yes, people could learn to handle this plan. People adapted to it. And that was, as I say, 1977.”

Sounds like familiar resistance that we regularly face here in North America.

Please take the time to watch this great film in its entirety.

Who on earth wouldn’t want their city to resemble Groningen?? This, I fail to comprehend.

Groningen: The World’s Cycling City from Streetfilms on Vimeo.