Rural Leader in an Urban Country

Prime Minister Stephen Harper has perhaps not surprisingly been re-elected as Prime Minister in a $300 million election that really didn’t change anything. We still have a minority government, we still have the same leader; the only outcome that will change as a result is that the Liberal Party will rid themselves of Stephane Dion as their leader.

Dion had a bold environmental plan, but with his heavy French accent he wasn’t very well understood outside of Quebec; people questioned whether he had a strong enough personality to be a world leader, and remnants of corruption were left over from the Liberals previously in power. I think Dion’s plan was at least a good start to set Canada in the right direction and set an example to be a world leader on preventing climate change.

Jack Layton made some solid gains in the election; on track to win 37 seats compared to the 29 he achieved in the 2006 election. He’s already known for his strong position on environmental concerns, and he’s seen as a potential strong leader so don’t count him out of the race to be a Prime Minister sometime in the next 10 years.

Now we’re back to where we started; we essentially have a rural-friendly Prime Minister in an urban country, who promotes environmental inaction, has contempt for the arts, and employs a strategy of political appeasement. Stephen Harper will have his hands full in the next 2 years to get Canada through the banking fiasco as-of-late that we are somewhat shielded from for the time being; but don’t kid yourself into thinking that Canada won’t be affected because it will hit this country very hard in the next 2 or 3 months.

MacLeans magazine ran a comical article in August claiming Calgary as Canada’s “Most Cultured City”. Their definition of the most cultured city is the “Percentage of households who spend money to attend museums and to attend the live performing arts”. Despite Harper’s contemptuous claim that arts are a “niche issue”, Harper still managed to gain every single seat in the province that is home of the most “cultured city” of arts. Anybody who has been to Calgary can tell you that there are at least 5 cities in Canada that are more “cultured” and “artsy” than Calgary by most standards. If anything, the city that spends most on museums and art is more likely a reflection of wealth than anything else. Victoria, BC, a hot spot for the wealthy to retire came in second place for being the “Most Cultured city” if that is any indication.

Here is an interesting interactive map that shows you just how Conservative Southern Ontario really is. In the middle you will see the biggest city in Canada: Toronto, in which the Conservatives interestingly gained 0 seats. Surrounding Toronto you can see the overwhelming support for the Conservatives.

I guess we’ll have to wait for the next election for any real change to happen with respect to the environment. 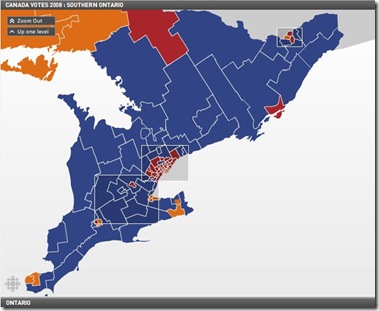