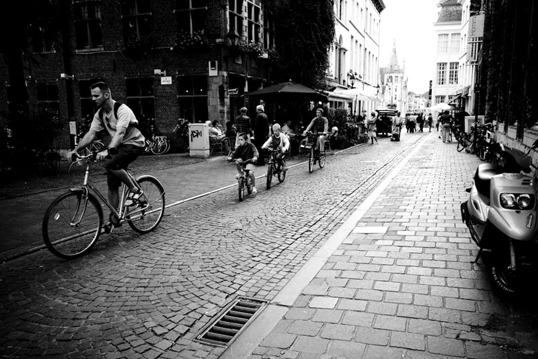 Sitting at a red light, a car driver yells out his window “Excuse me, is this the bicycle lane?”. The cyclist passively shrugs and slowly rolls his bike closer to the curb. The light turns green and the driver stomps on the gas pedal flying past the cyclist with less than a foot in between.

Many drivers feel that cyclists have no right to use the roads because drivers pay for the roads through fuel taxes and license fees. This couldn’t be further from the truth and reminds me of a modern-era tobacco industry-like outright fabrication.

Last week a National Post bigot columnist wrote a grossly ignorant and irresponsible article suggesting that cyclists should be licensed and taxed.

“But bike riders pay nothing, even though the cost of urban bicycle infrastructure, operating risks and potential liabilities are mounting. Bikers are getting a free ride that all non-bikers are paying for.”

It is sad that a journalist working for a national newspaper with 200,000+ daily circulation would make such a claim. At best it’s sheer ignorance; at worst it’s a contrived lie – both leaving Terence Corcoran absent of any sort of journalistic conduct.

But telling this to Terence would be fruitless. This is the same writer who made the outrageous claim that cyclists should be held accountable for the carbon emissions that they output from their breath while cycling. If this was an attempt at humour, Mr. Corcoran failed miserably.

“And then there’s the carbon footprint. When car drivers cruise Yonge Street on Saturday night, their metabolisms are more or less flat-lined. They just sit there, burning up little energy personally but paying for the cost of their automobile’s carbon footprint via taxes and fees. Bike riders grinding up the same route burn up a lot more carbohydrates, which their bodies convert into carbon dioxide and exhale, adding to their carbon footprint. The volumes are small, but it all adds up, and bicyclists don’t pay.”

Let’s get back to the topic on hand since this dense National Post columnist doesn’t deserve any more of our time.

A 2004 study by the Victoria Transport Policy Institute found that cyclists and pedestrians are subsidizing drivers:

Let’s look at how roads are funded. It is true that drivers support a substantial amount of the funding for highways. The Victoria study found that about 60% of highway funding comes from fuel taxes and vehicle taxes and 40% comes from general taxes and bonds. But more than 90% of cycling and walking happens not on highways, but on local roads – so the highway argument is inconsequential.

Cyclists and pedestrians pay income taxes, sales taxes, property taxes (directly if owners and indirectly if renters) and other taxes that contribute to local roads – all while automobiles are putting substantially more wear-and-tear on these roads, driving the costs even higher.

If anyone should be outraged it should be those who don’t drive but pay into the vast funds that subsidize drivers.

Instead of spreading lies, those in the media should be encouraging what they know in their heart to be the better way.

While sitting at the red light, with a streetcar directly to my left – another cyclist sits between me and the streetcar. The driver of a car behind us sticks his head out the window and says to the cyclist to my left, “is this the bike lane?”. The cyclist grudgingly rolls his bike to the curb without responding to the driver.

I turn my head to the left and say, “Excuse me, is this the asshole lane?”

23 thoughts on “Cyclists Paving the Way for Ungrateful Drivers”