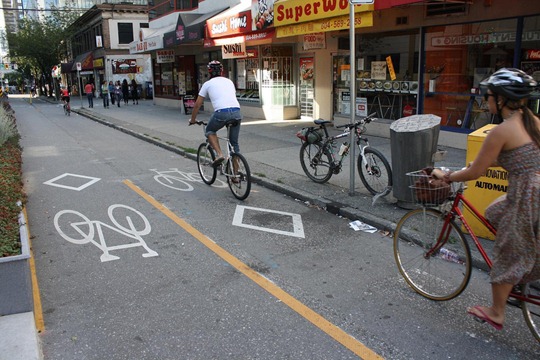 After posting an article about the City of Vancouver passing a vote to build a two-way protected bicycle track across downtown I decided to search Twitter to see what people thought of these new bike lanes.

One particular tweet caught my eye (and no, it wasn’t because it was tweeted by a beautiful Vancouver actress/model) – it was the contents of the tweet that caught my attention.

This one tweet led to a several-day twitter showdown between a citizen bicycle advocate (me) and this disgruntled (actress/model) motorist.

“Vancouver is spending 3.2 million on yet ANOTHER bike lane downtown (on Hornby) are you KIDDING ME?! Is our city being run by monkeys? #WTF”

My first thoughts were that 3.2 million dollars is a drop in a bucket in comparison to the BILLIONS of dollars that are spent to build roadways for automobiles in Vancouver. After all, only 0.5% of Vancouver’s roadways are dedicated to bicycles (and don’t forget, bicyclists are taxpayers too).

I also felt that comparing city councillors with monkeys was a bit unfair (last I checked, George W. wasn’t the mayor of Vancouver). I mean, these “monkeys” just want to build better bicycle infrastructure to make it more comfortable, safer and convenient for tax-paying bicyclists to ride through the downtown core – with added benefits like reduced congestion, less pollution, healthier citizens and less stress.

Are drivers so selfish that they can’t spare a small amount of space for bicycles? I wanted to know.

So I asked her to enlighten me on why she thinks this bike lane is a bad thing for Vancouver. She responded:

But I just had to point out that the 3.2 million dollar capital cost is actually a really good deal. The equivalent cost for building an underground subway for 2.4km is about $600 million dollars plus operating costs. An above-ground LRT system would cost at least $360 million.

3.2 million to potentially move thousands of people in the future with minimal operating costs, while helping to reduce traffic congestion is a bargain.

“yes but we already don’t have enough room on the roads for the amount of cars- to take lanes AWAY for bikes is just stupid.”

This is the classic motorist argument. That there already isn’t enough room for the amount of cars, so giving up *any* space for bikes is “stupid”.

I countered that bikes take up only a fraction of the space that cars use, and I surmise that if the goal is to move more people, then it absolutely makes sense to invest in bicycle infrastructure. All you have to do is go to China and imagine that everyone on bicycles or scooters were driving automobiles – there wouldn’t be enough surface area to support it.

With our populations increasing, we need to provide people alternative options. Public transit is one option with high capacity for transporting people, but it’s extremely expensive, often unreliable – and depending on where you live – bicycling is often faster.

With induced demand theory, the feeling that our roads are running at full capacity will always be present whether we have 4 lanes of traffic or 14 lanes. Induced demand – with respect to transportation planning – states that an increase in roadway expansion will always increase traffic demand – traffic that wouldn’t have otherwise occurred but for the new capacity.

Of course, an increase in roadway capacity will help relieve congestion in the short term, but it will gradually catch up as more demand is “induced” to use up the excess capacity. Once this capacity is filled, most motorists believe the answer is to add more lanes – but all you need is a basic understanding of induced demand theory to know that this is not the solution (unless you truly want to have 25 lanes of traffic cutting through your city).

Using reverse induced demand theory, we can conclude that a slight reduction in roadways to make space for bicycle infrastructure will decrease demand on that roadway – while at the same time it will increase the capacity and safety of bicyclists riding through downtown Vancouver – one car lane is capable of creating two bicycle lanes.

I then argued that people on bikes are human too and asked whether she thinks people on bikes shouldn’t be given any space – despite the fact that motorists have been given thousands of kilometres of roadways.

This led to her conceding that she isn’t against bikes – however, her idea about how to make space for bicycles drastically differs from mine:

“I’m not against bikes- City should b trying 2 plan 4 more space 4 EVERYONE. Having 1 take fr the other seems redundant to me.”

Some motorists want to have their cake and eat it too. Cars are already taking most of the land’s surface area in our cities. Is it even possible to give a little bit of space for bicycles without sacrificing a small amount of space from cars?

Well, possibly. I suggested that perhaps we could take away on-street parking instead of sacrificing a lane of automobile traffic for bicycles. It’s a win-win situation for everyone. Vehicular flow can stay the same, bicycles can have safe infrastructure, and automobiles can park underground or on side streets.

“Lol and park where?”

While traveling in Shanghai I noticed that most (if not all) arterial streets had no on-street parking. This kept automobile traffic flowing well, and also makes it easy to facilitate their great protected bicycle facilities.

In North America, some drivers aren’t willing to sacrifice a single lane of traffic for bikes, nor are they willing to give up their beloved on-street parking (heaven forbid they need to walk from a side-street to get to their destination).

In the end, this is not an uncommon debate for me to participate in. All I can do is respect motorists’ opinions and try to show them another perspective. After all, when I was growing up I was of a similar mindset – this is how most people in Canada were raised in the 80’s and 90’s.

Humans are inherently selfish, and any threat to our current way of life is strongly defended.

But when you look at the bigger picture, we can’t continue to drive automobiles as much as we do – especially as our population increases.

Automobiles pollute, take up vast amounts of space, and they breed many unhealthy and obese citizens. We need solutions that will make our cities better places to live and breed healthier, happier, stress-free citizens.

The bicycle can do just that.

11 thoughts on “Motorists Against Bicycle Infrastructure”