My Dutch Cargo Bike Stolen & Recovered in Less Than 10 Minutes 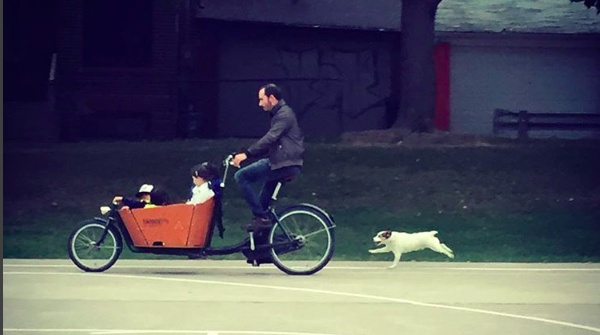 It was only a few minutes after my 5 year old daughter’s school concert production came to an end when I received the phone call from my friend Brad.

My ringer was still muted to avoid disrupting the concert; but I could feel it vibrating in my pocket.

Brad: “But do you have it with you right now? There’s a sketchy looking dude riding erratically around the park on a bike that looks just like yours”

I sprinted to the park with my laptop bag in tow. I arrived only 2 minutes after hanging up the phone with Brad.

I look across to the far side of the park, and I see Brad riding my cargo bike with his 4 year old daughter in the front.

Laughing hysterically at the preposterousness of the situation – and out of sheer happiness that my bike was recovered – I ask Brad how he got my bike back so fast.

“I went up to the guy and yelled, ‘HEY, THAT’S NOT YOUR BIKE! And he drops the bike on the ground and runs that way”

It is hard to fathom that a thief would go through all the effort to use bolt cutters to steal a bike, only to ride it 1 block away from the school and do circles around the park.

I suppose maybe he was high on something and just looking for a joy ride.

Stranger things have happened with my cargo bike. Last year workers at Toronto’s Pearson International Airport threw the same bike in the garbage after clearing it from a non-designated bike parking area where I had left it before heading on a flight to Florida.

I take precautions to secure my bike, but I don’t stress too much about it being stolen. The bike has more than paid for itself already. I have been riding it virtually every single day for the last 4 years. If you add up the public transit costs, gas and parking fees saved, it has paid for itself more than 7 times over. A monthly transit pass in Toronto alone costs $1,698 per year, so I could almost buy a new cargo bike each year just with the money I save from not having to buy transit passes.

But even still, it’s not fun having a bike stolen. I was fortunate enough that this thief was not the brightest, and thanks to Brad’s quick thinking and action, I will ride my cargo bike yet another day.