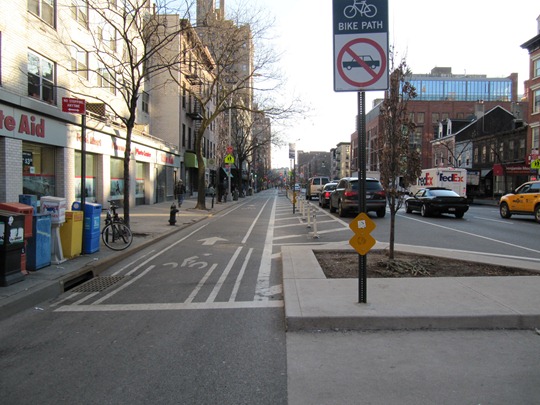 In an important announcement last week, the United States Department of Transportation (DOT) has said “the establishment of well-connected walking and bicycling networks” will be part of all federal-aid transportation projects.

The announcement came out in the form of a Policy Statement that was signed on March 11th and officially announced on March 15th at the National Bike Summit by Transportation Secretary Ray LaHood.

The announcement quickly spread to the mainstream through the Wired article “Feds Deem Pedestrians, Cyclists and Motorists Equals”.

What does this mean for American cities?

It means anytime the Department of Transportation provides federal funding for infrastructure, they will assess whether the new infrastructure accommodates cyclists and pedestrians – as well as motorists – a drastic change from history where motorist needs were the primary consideration and pedestrians and cyclists were merely an afterthought.

What has resulted from decades of ignoring pedestrians and cyclists? People are forced to drive everywhere.

In 2003, the average commute to work in the United States was 24.3 minutes each way over an average distance of 16 miles (25.6KM) (this has no doubt increased in the last 7 years).

Even as a cycling advocate, I wouldn’t expect the average person to ride a bike 25KM each way to work. Thus, it doesn’t necessarily surprise me that most people rely on their car to commute to work every day.

What does surprise (and sadden) me is the fact that people in sprawled neighbourhoods are forced to drive their car to the corner store, or to a restaurant, or to see a movie, or to visit a friend.

All of these distances can easily be done on a bicycle – and walking a mile shouldn’t be a problem for an average person.

So why do people choose to get behind the wheel for these short distances?

In late October 2009, my brother, sister and I met my Dad in Texas to take him to a Dallas Cowboys football game for his 60th birthday.

We stayed at the Hilton Arlington (2401 E Lamar Boulevard to be exact). I chose the hotel because of its proximity to the football stadium – I surmised we could easily walk to the stadium in about 45 minutes.

Here’s a map with walking directions from the hotel to the stadium: 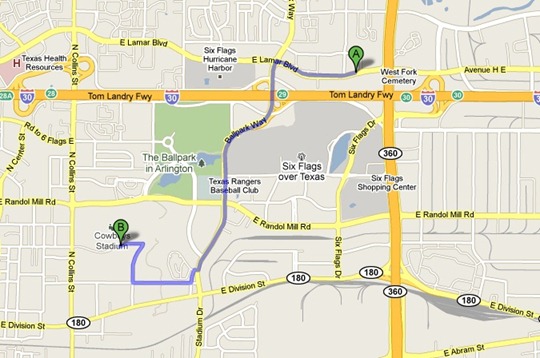 Here is a Google street view of the bridge we needed to cross – with its narrow shoulder: 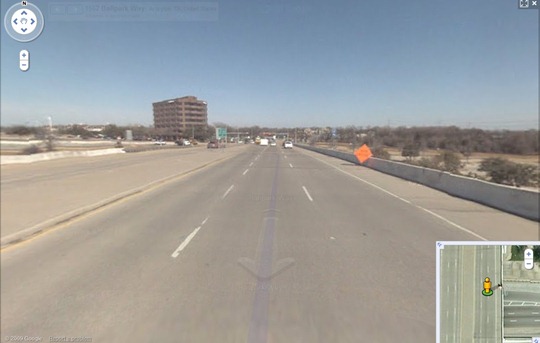 Had we stayed in a hotel on the east side of Highway 360, it would have been even worse. Google Maps gives this stern warning:

And here is the highway we would be forced to walk along: 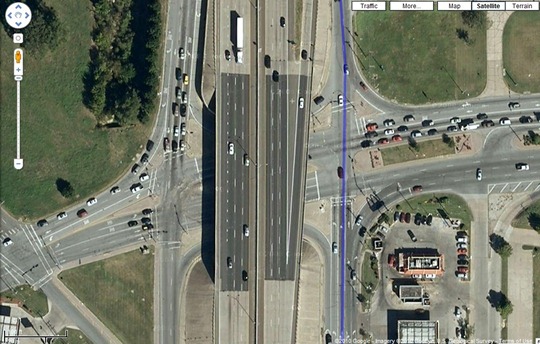 No wonder people don’t walk anywhere – it’s not a pleasant experience. The roads are engineered to make it convenient to drive and all other methods of transportation are either discouraged or even banned in the case of most major freeways.

With the new Policy Statement from the DOT, this will change.

It may take another 30 years to catch up with Europe, but the federal government under leadership from Barack Obama is leading the United States to become less reliant on fossil fuels while building more livable cities.

The Department of Transportation has already shown its commitment in the work it has done in New York City by creating a new public space for pedestrians in Times Square and building segregated bicycle infrastructure along Broadway Ave.

13 thoughts on “United States Moving Forward After Decades of Neglect”