Anonymous Thank You Letter For Bicyclists 5 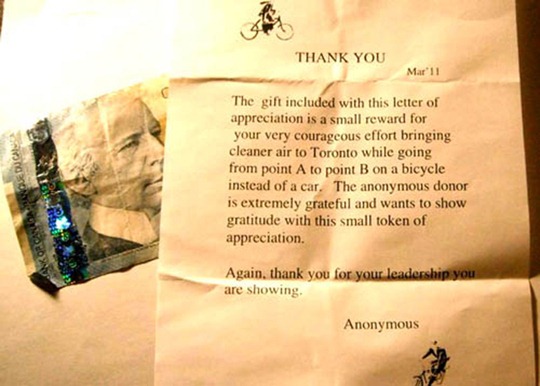 Earlier this week, random people on bicycles in Toronto received a thank you letter from an anonymous lady. On the outside of the letter was written “Thank YOU ($ gift inside)”. The lucky bicyclists opened the envelope only to find a $5 bill along with a typed letter from the anonymous donor:

The gift included with this letter of appreciation is a small reward for your very courageous effort bringing cleaner air to Toronto while going from point A to point B on a bicycle instead of a car. The anonymous donor is extremely grateful and wants to show gratitude with this small token of appreciation.

Again, thank you for your leadership you are showing

The letter could have also thanked the bicyclist for taking such little space on our roadway to make traffic flow better, and for putting such little wear and tear on our roads to help reduce expensive road maintenance costs.

Several people reportedly received this letter and $5 bill, but so far nobody has figured out who the kind lady is. This is a very kind gesture and great for promoting bicycles in our city.

To the anonymous donor, thanks for helping to promote a more liveable city. 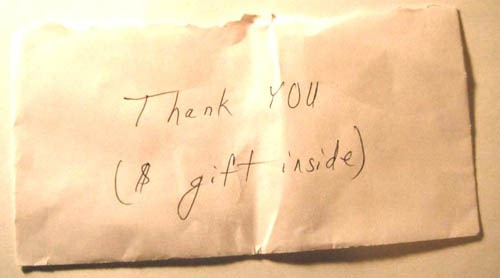 5 thoughts on “Anonymous Thank You Letter For Bicyclists”