I’ve had several discussions with friends and coworkers over the last few weeks about the economy, Christmas, and our excessive lifestyles that we’ve come to expect in North America.

To me, Christmas is the time of the year that manifests society’s expectation and affection for material goods. Every year there is a new gadget or toy that everyone wants and the gifts they received last Christmas are never enough to satisfy their wants.

This year however, things are a little different. The economy in the US has taken a nose-dive and even though most Canadians aren’t feeling the impact quite yet, people are still apprehensive to spend on extravagances even while only a year ago they wouldn’t have second guessed it.

Deep recessions are a good time for people to reconsider what they think they really “deserve”. Mark and I were talking about this the other night: we talked about why many North Americans think that they “deserve” more than others in the world. The average household income in Canada and the United States is around $50,000/year. According to “Global Rich List“, someone making $50,000 a year is within the top 1% of the world.

Yes this is oversimplified because it doesn’t take into consideration the cost of living. But it nevertheless points out a fundamental flaw in the Western society: People always want more even though 99% of the world has less wealth than us.

Why do we deserve more than a hard-working farmer in Indonesia? Why can’t we be happy with what we have and try to be more pragmatic about the wasteful goods we purchase?

I suppose it’s human nature to always want more than your neighbour; and easy credit from banks has given North Americans the false sense of ever-growing endless wealth. World wealth can’t continue to rise simply by increasing debt, and the world needs to come to the realization that the simple things in life will bring happiness, not money.

Let’s all take some time this holiday season to reflect on our lives and ask ourselves whether we really need all these gifts. I, and many of my friends are extremely fortunate and have more than we could ever ask for, so this year let’s rise above society’s expectations and keep it simple.

Most importantly, spend time with your family and friends, because no gift can replace spending time with family

(Except maybe this Wooden Asian Family for only $19.95 by Plan Toys) 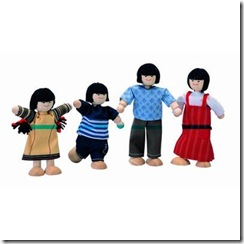