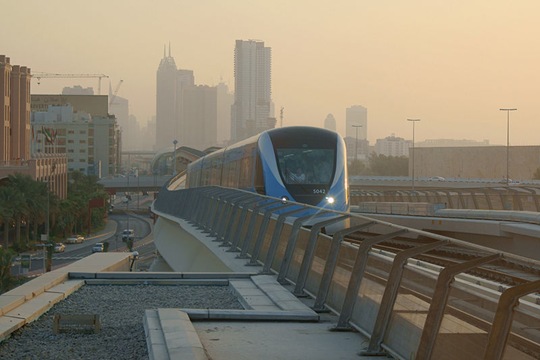 Dubai Metro on the first day. Photo courtesy of Wikipedia

Yesterday, on the ninth day of the ninth month of the ninth year of this century at 9:09 pm Dubai matured from a city to metropolis by running its first metro train. The Dubai Metro consists of one partially-functioning Red Line, four under-construction future lines and a network of feeder buses. Once the Red and Green lines are completed they will give Dubai’s Metro the distinction of being the world’s longest driverless rail network. The stations are posh and futuristic looking and the trains are sleek with a maximum speed of 90 km/hr.

This is a major step forward for Dubai to establish itself as a legitimate city and touristic spot. This network was dreamt up when Dubai was on top of the world, being hailed as the Las Vegas of the East and shocking the world with its larger-than-life real estate projects like the man-made palm-shaped islands and the world’s tallest tower, Burj Dubai. However, Dubai is now in the midst of an economic downturn. Hundreds (sometimes thousands) of lower and middle class expatriate families are leaving Dubai each month after either losing their jobs or seeing disheartening losses in business.

The metro does offer hope of making this city more commutable. At the moment Dubai has massive congestion problems due to the sheer volume of cars travelling from the city to the Jabel Ali Free Zone (the main industrial area), a less-than-desirable network of buses and terribly planned infrastructure. Dubai is infamous for creating spectacular malls and buildings and leaving the actual transport infrastructure to connect the various parts of the city as a mere afterthought. I have always imagined someone in their meetings saying ‘Hmmmm, so how will someone get to Burj Dubai?’. 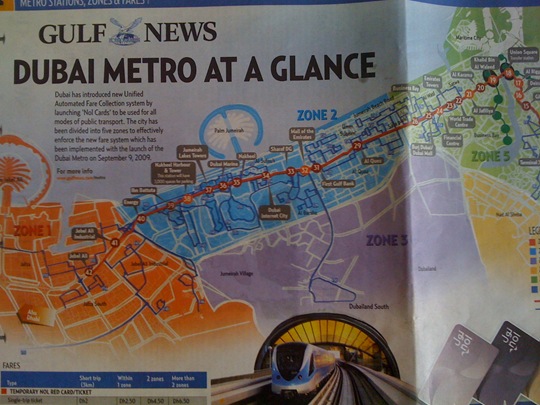 Photo by Kimi Sokhi of the Gulf News Metro Special

The new metro consists of five travel zones and tickets are based on the distance one travels, ranging in price from 0.90 Dhs – 13.00 Dhs (approximately $0.24 – $3.55). Student/senior/child discounts are available. There are also four different types of fare cards one can purchase:

I am the first one to hail a good public transit system, but I see more than a few issues with the Metro. Not only does it bother me that they have created ‘Gold’ cabins for those that can afford to pay almost double the normal fare, but I doubt that the people who are meant to use the Gold cabins will ever set foot on the Metro. When gas is $0.25/litre, I don’t see the local Emiratis and the upper and middle class expatriates opting for a public transit system that costs about the same and doesn’t quite match up to their chauffeur-driven cars.

Oh and another thing. News flash: Dubai gets HOT! The kind of hot that makes the walk across the street unbearable. Many of the metro station are not in the highly populated spots where people live or want to go. With driving and taxis being reasonably cheap, what would inspire someone to walk in the sweltering heat to a bus station, wait for a bus, take the bus to the metro station, take the train to your destination (almost) and then taking another bus from there? 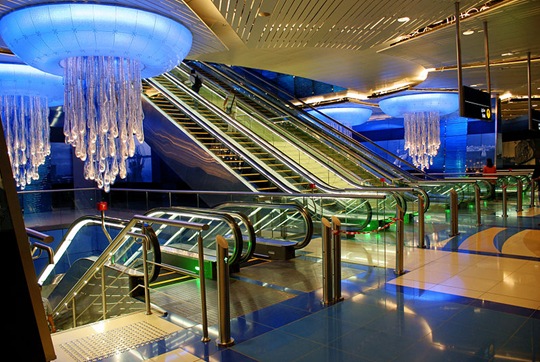 Many of the stations are located near Dubai’s popular malls. However, a majority of the malls that will be connected by metro have started charging for parking! There is either a time-limit on the free parking or you need to show proof of purchase. As a commuter this would deter me from using the metro if I have to pay for parking at my base station. I can also see this backfiring on the malls since it will upset patrons as they cannot stay at a mall for more than 2-3 hours without having to pay for parking. They should be prepared to lose customers such as young teens or housewives that spend their afternoons socializing at malls – a significant part of the Dubai culture. Why not build ample parking for commuters at each station instead of waiting until it becomes a ‘problem’ down the line? Alas, this is indicative of the short-sighted, reactive thinking that the city has become known for.

[side note: another example of their short-sighted, money-making schemes is charging toll on the ONLY highway in the city and all the bridges that connect the old part of the city (Deira) to the new (Bur Dubai) without providing viable alternatives and two years before the start of the metro]

Public transit is a great social equalizer. In Toronto riding the subway is a multicultural experience. People of all ages and backgrounds ride the rocket each day. You can get stuck next to an emo-teen listening to his depressing tunes loud and proud or a mother nursing a baby that just won’t shut up. But that’s the beauty of it. When you get into the subway car, you are one of the crowd, you are all just folks trying to get from point A to point B. I really hope that the metro in Dubai will act as a catalyst for bringing together the labourer who toiled all day in the heat of a construction site and the Sheikh whose house was being built.

The sceptic in me thinks otherwise. This is a city that has neatly demarcated class lines and social realms. Appearances matter more than reality in Dubai. There is a huge social stigma in taking a bus, which explains the existing bus system only being used by those that have no other viable options. Comfort and luxury trumps the environment. But this sceptic will keep her fingers crossed when she rides the metro this week and hopes to spot the elusive signs of diminishing egos, disappearing class structures and respect for the environment.