Flowers on a One-Way Street 6

The summer of 1967 sealed the fate for the future of Toronto. The city was on the verge of a revolution that would see the community reclaim the urban landscape to create a Mecca for the bohemians to hang out and relax – free from the toxic exhaust fumes that had smothered the city.

It was the Summer of Love – the height of the hippie movement that pitted a new generation of youngsters against their World War II era fathers – and the city of Toronto was at a crossroads between turning downtown into a network of “thoroughfares” and reclamation of the streets by its citizens.

Toronto’s Haight Ashbury, its Greenwich Village was formed on an uptown street called Yorkville Ave. Hundreds and sometimes thousands of people congregated here – spilling off the sidewalk and the roadway.

Motorists drove through Yorkville Ave just to catch a glimpse of the “hippies” – or the zoo – as former mayor Allan Lamport put it.

27-year-old film director – the late Robin Spry followed the “hippies” in his film Flowers on a One-Way Street, in which he begins:

“Out in California, the search for a different way of life is helped by the physical environment. But here in Toronto, the hippie community revolves around a small overcrowded street called Yorkville Avenue”

Tensions and exhaust fumes were building in the Summer of Love, and a local group called the Diggers – led by the cool, calm, charismatic 23-year-old David DePoe – wanted to turn Yorkville Avenue into a car-free zone:

“Exhaust fumes are polluting the atmosphere and people are getting run over. It tends to create an atmosphere that doesn’t make it a pleasant place to be”

DePoe staged a 3-day sit-in where the Diggers peacefully occupied Yorkville Avenue to call on city officials to agree to turn it into a car-free zone.

DePoe was completely shocked when the police were ordered to use whatever force necessary to remove the protestors. Kids were dragged by their hair – some beaten – before being thrown into paddywagons and sent to jail.

In response to the force used by the police, Metro Toronto Chairman William Randall Allen responded:

“I offer no criticism whatsoever of the activities or the conduct of the police department. It has to be established and known once and for all that in Metro Toronto when there is mobs and gangs, who seek out as a group to defy law and order then they are going to be treated exactly as the circumstances call for. Our police were required to use force in order to clear a pathway down a street which is a public thoroughfare.”

More than 40 years later, it is obvious who won the battle. Yorkville Avenue lost to gentrification – becoming an upscale shopping mall free of the hippies and musicians who occupied it in droves during the Summer of Love – and automobiles still pass through Yorkville Avenue to this day.

But the summer of 1967 was a time when the citizens of Toronto stood up for what they believed in and fought those in power to improve their community. The hippies were seriously concerned about where North America was headed:

“We’re talking about changes in values – and we’re not talking about a man being judged by his property. We’re talking about him being judged by his personal worth. He’s a member of the community because he is a person. And he has as much right to be a member of that community as anyone else. It’s very clear that the structure of the city government is not geared to handling social movements of this kind. Yet these social movements are happening in the city. You know what about that? It’s pretty serious” David DePoe 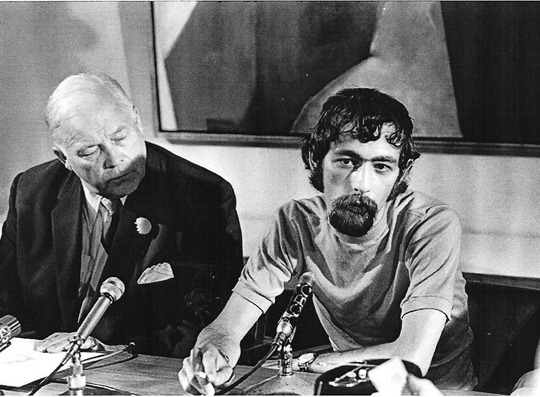 Could David DePoe’s social movement happen in 21st century Toronto? Could a group of concerned citizens in 2010 storm City Hall like DePoe did in 1967? Would these concerned citizens be willing to spend time in jail and obtain a criminal record for what they believe in?

If not for the likes of David DePoe and Jane Jacobs, we would surely be worse off than we are. But we still have a long way to go and a new generation of advocates are emerging in the form of the Toronto Cyclists Union, the Toronto Pedestrian Committee, Spacing Magazine, and Toronto’s renown volunteer advocate Dave Meslin – just to name a few.

Advocacy in 2010 is different than in 1967 – as we saw last week when we revealed rumours from inside City Hall that Toronto’s bike sharing program may be in jeopardy.

We e-mailed our fellow cycling advocates, we tweeted up a storm, we blogged, we sent letters to our city councillors, the mayor. The mainstream media then followed up – with articles from the National Post and the Toronto Star that confirmed Toronto’s bike sharing scheme is in flux.

This is how advocacy works in 2010. When people give a shit, word spreads.

But would these same advocates be willing to spend several nights camping outside City Hall in protest? Would they be willing to be dragged by their hair and thrown in the Don Jail for the cause? Hopefully we won’t have to find out.

Yorkville ended up the way the powers that be wanted it to end up – a clean, upscale shopping mall free from the dirty hippies. Has Toronto accepted its fate as a city of automobiles and upscale shopping centres?

Can the city retain the Kensington Markets of modern day Toronto? Or will Kensington become what Yorkville has become through gentrification?

It is up to us to see a better future for Toronto. A city where our streets are a pleasant place to be – not a city where we are merely rushed along.

E-mail your councillor and tell them that you support liveable streets that embrace community over traffic flow. Tell a business owner that you showed up by bike or by foot, and that car-free communities can attract more customers.

Tell them to visit Prince Arthur street in Montreal if they don’t believe you – or almost any city in Europe.

Vote for politicians who support initiatives that provide alternatives to driving cars.

“Not TV or illegal drugs but the automobile has been the chief destroyer of American communities.”

6 thoughts on “Flowers on a One-Way Street”