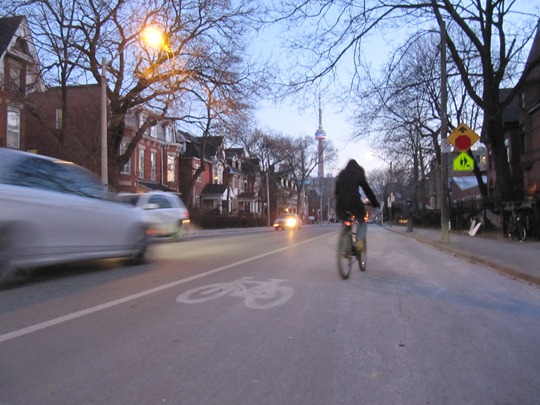 It’s refreshing to see the amount of media attention bike lanes have been receiving in this year’s mayoral race in Toronto. Less refreshing however is the deplorable use of the “war on the car” rhetoric.

There is no such thing as a war on the car. Every mode of transport in our city deserves its rights to the road, and bikes – as well as cars – should be considered in urban traffic planning.

Bikes are just trying to catch up since they were neglected for so many decades.

Having bike lanes as an election issue indicates people are thinking about bike lanes – for better or for worse.

Rossi is obviously pandering for votes and reaching out to suburbanites who rely on their automobile to commute downtown – some of whom would be content to see all downtown streets become expressways.

It perplexes me to understand why people who lives outside the city should be deciding what we do with our downtown streets.

Reader Ellen Derzko comments on the addition of the Jarvis street bike lines in a Spacing.ca article:

“I commute downtown through that route every day and it’s bad enough as it is. Please give us car-drivers a break. It’s not our fault we live north of the 401, have kids and don’t want to bicycle 60 kms to work every day.”

Please give us car-drivers a break?

Is a 4-lane thoroughfare on a historic downtown street not enough of a “break” for the poor drivers?

Tweeter @ToddTyrtle asks “Why do suburban drivers deserve a say in how a downtown neighbourhood deals with its street? I don’t tell them where to put their stripmalls”.

I wonder what Ellen would think if a mayoral candidate proposed turning her cul-de-sac street into an expressway?

I wonder if Ellen realizes that actual human beings (many of whom also have kids) live on Jarvis street?

The Jarvis street controversy goes beyond suburban commuting drivers. Others say bike lanes on Jarvis are pointless because Sherbourne street – 3 streets over from Jarvis – already has bike lanes.

But this same argument could be made about car lanes. In the same Spacing.ca article, commenter Mark retorts:

I’d be willing to entertain some idea that says “No bikes on Jarvis and no cars on Sherbourne.”

No cars on Sherbourne? This is obviously a ridiculous suggestion – but this is essentially what some anti-bike lane activists are arguing.

Another commenter on a blogTO article suggested that cyclists should “require licensing, taxes & user fees and insurance if they want to ride on the roads with cars. It’s only fair”.

“Using your logic, if you want to drive on the same roads as trucks, you should be required to get your A-class truck license, be required to stop at weigh stations, and pay commercial vehicle licensing fees. It’s only fair.”

The response was somewhat predictable:

Wow James, maybe you shouldn’t be riding your bike all year round… Apparently falling on your head contantly(sic) in the winter has affected your brain..

“Driving on the same roads as trucks”… You make me laugh.. 😉

Such is the name of the blog commenting game.

Some people who comment online are incapable of arguing using sound logic and instead resort to thoughtless conjecture about how cycling is confined to few modern day hippies and the working poor and automobiles should be given ultimate priority in urban traffic planning.

I strongly believe in the “Complete Streets” philosophy – and moving cars is indeed important in urban planning.

I just think we need to be smarter about how we design our streets. We have a history of catering only to automobiles and generally ignoring pedestrians and cyclists needs.

There are a lot of great opportunities in our city to create pedestrian-only streets – Kensington Market (Augusta Ave.) is the most obvious example.

And we have many great opportunities to create better cycling infrastructure on major downtown thoroughfares – especially on east-west arterials where we are currently lacking infrastructure (Richmond/Adelaide streets, and Queen street comes to mind).

A Facebook group called “Can this bike lane get more fans than Rocco Rossi” has already garnered 1,999 supporters in the past week. The general concept is stated in the headline:

“A citizen in a car is not more important than a citizen on a bike, and there should not be discrimination according to mode of transport.”