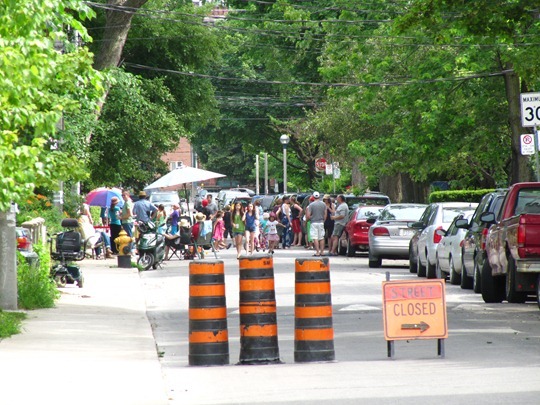 Toronto’s mayor Rob Ford thinks that bicycles don’t belong on the streets. Yet he rips out bike lanes forcing cyclists to share lanes with automobiles because cyclists are apparently the cause of our traffic congestion problems.

Last week his brother, Doug Ford – a City Councillor – conceded that he’d rather pay a $5 toll than “knock off 14 cyclists” on his way to City Hall in his Lincoln Navigator SUV. Oh how flattering Doug.

This is what present-day Toronto is dealing with: narrow-minded suburban politicians who think that streets were solely built for their single-occupant motor vehicles, and anyone who rides a bicycle is asking to get killed (“at the end of the day it’s their own fault if they get killed”, opined Rob Ford in 2007).

Furthermore, playing ball hockey on streets is banned citywide. Lest we allow kids to slow down “important” motorists and give these kids anything to do besides staying indoors to watch car commercials infecting their televisions so these kids can dream about one day driving their own car.

Isn’t that what defines us North Americans after all?

Given this state of car-centrism imposed on Canada’s largest city, it was a pleasant surprise to stumble across a residential street that was reclaimed by its residents for but one day last Friday (Canada’s birthday).

Residents blocked off the street and children played amongst themselves while parents looked on. Some even setup their patio furniture on the street to enjoy the festivities and the unique experience of having their own street to themselves for just one day.

It is a beautiful sight in a city with limited space for children to play within eye sight of their parents. 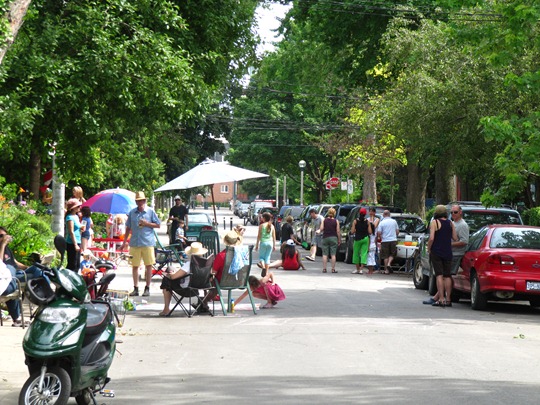 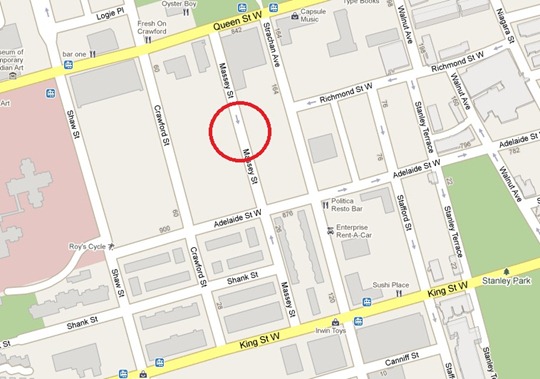 This particular street often has children playing on it – a rare find in Toronto. Just yesterday the neighbourhood children had to pause their game to allow me to pass through on my bicycle.

It put a smile on my face when a 9-year-old boy playfully challenged me to a game of “chicken” as I approached him, before jumping out of the way when I slowly pedaled past.

Unfortunately, decades of narrow car-centric agendas at the municipal, provincial and federal levels of government have discouraged and banned kids from playing on residential streets while ignoring the core issue: that drivers are driving excessively and unsafely in residential areas.

I hope to see more streets like Massey Street in this car-centric city, and hopefully one day we will change our laws to actually encourage kids to use their streets for games instead of treating residential streets like freeways while giving motorists impunity from any liability.

14 thoughts on “Reclaiming Streets For People”