PedalPub: Bringing the Bar to the Bike 16 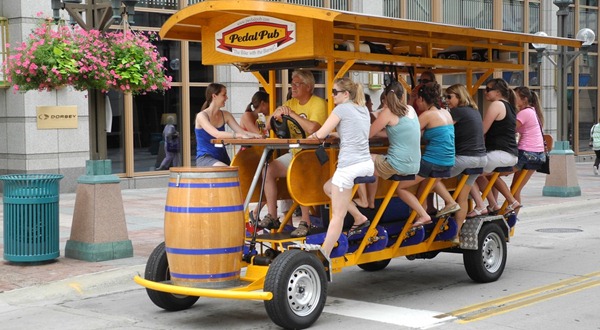 Why bring the bike to the bar when you can bring the bar to the bike?

PedalPub is a human-powered mobile pub which was recently spotted in Minneapolis, Minnesota by our friend George who was visiting the Twin Cities for a conference.

Known as “the bike with the barrel”, the PedalPub is powered by its patrons while they enjoy a tasty cold beer. It’s a great way to see the city, get some exercise and enjoy a beer.

The Minneapolis PedalPub was started by two friends, Eric Olson and Al Boyce after they spotted the original version of PedalPub in Amsterdam (known as Fietscafe or Bierfiets in Dutch).

Eric and Al, both of whom had day jobs, bought their first PedalPub in 2007 with an initial $60,000 investment from savings and home equity loans. They have since grown the business to eleven PedalPubs in Twin Cities, plus other licensees in several cities throughout the United States.

The original PedalPub was invented by two Dutch brothers, Henk and Zwier van Laar, who have been operating their Fietscafe in the Netherlands since 1997.

The price for renting the Minneapolis PedalPub ranges from $240 for a one and a half hour weekday tour, to $380 for a 2-hour weekend tour. The rental includes a pilot to steer the PedalPub, but passengers are required to bring their own beverages of choice (either in coolers or via mini kegs).

The PedalPub weighs 2,340 pounds (empty), has a top speed of 5mph and can hold up to 16 passengers, plus the pilot. There are 5 seats on each side with pedals plus two without, a bench for three in the back, and a space for a standing bartender in the middle. 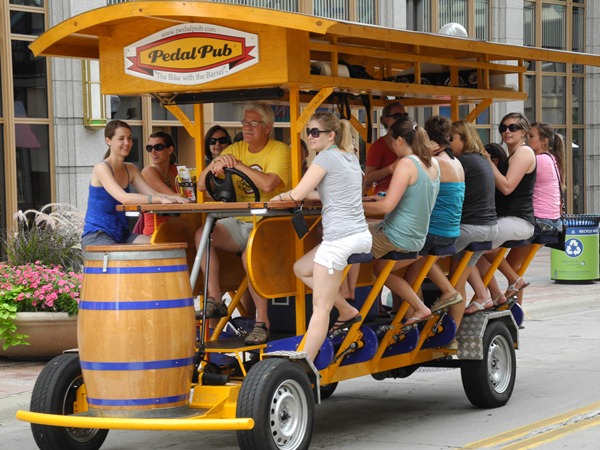 It certainly isn’t the fastest way to tour a city, but I can’t think of a more fun way to enjoy a beer with friends.

This is definitely something I would like to invest in.

16 thoughts on “PedalPub: Bringing the Bar to the Bike”