My cousin’s band (Panic & The Rebel Emergency) are playing at the Mod Club Theatre in Toronto tonight (Wednesday June 29th). They have been recording their debut CD for the last year in New York City, and they have returned to Canada to release the CD and put on a kick ass show at the same time. The price will be $10 at the door or $15 with a CD.

The music is a mix between Rock/Alternative with Reggae, and I can assure you that reggae artist Tony Panic and The Rebel Emergency put on an amazingly entertaining show with intense emotion both in their singing and their music.

I believe the doors open at 8:00PM and they should be going on sometime after 9PM. I have also been informed that the opening bands should be quite good as well. Be there! It will be a great show. 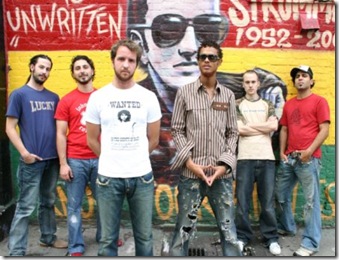 One comment on “Panic and The Rebel Emergency CD Release Party”