One of my biggest pet peeves is Taxi Cab drivers who don’t turn their taxi lights off when they have a customer in the car. I’ve always had the understanding that the whole point of a taxi cab having a light on top of their car is to indicate to potential customers whether they are available or not.

On several occasions, and it seems to be directly related to geography and different cultures in different cities, I have attempted to flag down taxis with their lights on and they refuse to let me in the car because they either have someone in the car already, or they’re picking somebody up that called them for a ride. Such was the case in Los Angeles, where it was almost impossible to flag down a taxi yet they still all had their lights on. I was told that you have to call them to pick you up. I have no problem with calling for a ride, but turn your damn light off then.

In Guelph, Ontario I once waited 2 hours for a taxi. I called the taxi company several times, and every time I saw a taxi they would pick up a group of other people right before our eyes. Or another taxi would show up with his light on, but he would refuse to pick us up. I almost got in a fight with a taxi driver simply out of frustration, and I ended up walking most of the way back to my cousin’s house which was a 2 hour walk before my cousin picked me up in a car.

One thing I do love about Toronto and New York City is the fact that I can walk outside and basically flag down a taxi at any time of the day without waiting for more than a minute or two. 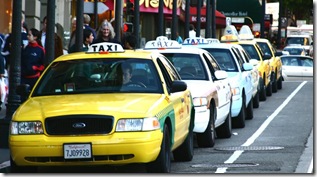