I was driving my car this evening and when I pulled out onto the road I ended up driving behind an SUV that was driving very slowly. He eventually pulled over to the right, so I started to pass him on the left. Just as I started to pass him he pulled a U-Turn right in front of me. I slammed my brakes and the anti-lock system kicked in. I beeped at him, and then waited for him to finish what turned into a 3-point turn. After his turn he rolled down his window and said “Don’t tailgate you f#ck!ng ass#ole” and he drove away. He was already gone before I could say anything, so I kept driving. When I looked in my rear view mirror I saw him attempting and struggling to parallel park his truck. So I turned around and as I approached him, he was stuck. He was inches from the car behind him, and his truck was on a 45-degree angle. His girlfriend was getting out of the truck to help guide him; he couldn’t get out of this one. So I drove by slowly, put my hands up in the air and clapped my hands to applause his weak attempt to parallel park. I finally drove away and saw him continue to struggle in my rear view mirror. I figured I had the final word in the situation; it must have been humiliating for him to tell me off and then struggle to execute a parallel park. But me being the spiteful person that I am, I figured I’d have a little more fun with the situation. So after I returned from my errands I wrote him a little note and taped it to his window.

See image below for my letter to the driver: 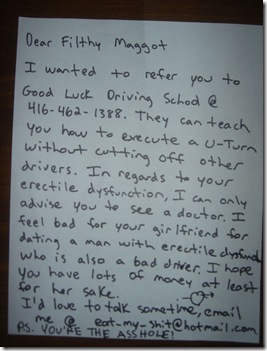