In 2001, the City of Toronto formed the Toronto Waterfront Revitalization Corporation (TWRC) with a mandate to revitalize Toronto’s waterfront in phases. Everybody in Toronto is aware of the huge potential that the Toronto waterfront has, but nobody has done anything about it yet. It’s amazing that it has taken this long for a city to do improve the waterfront. The Toronto waterfront could be amazing and a huge cash cow for the city as a tourist attraction. One city that I’ve visited that I think has done an amazing job on their waterfront is the City of Baltimore. With their “Baltimore Waterfront Promenade“, they have 7 miles of shoreline that makes for an excellent tourist destination.

The first significant project that the TWRc has begun is the West Don Lands Precinct Plan. It’s a plan to create a new waterfront community in the Toronto East end exclusely on provincial owned property. The plan includes an amazing 23 acres of parks and public spaces, a new public transit line, 5,800 residential units (including 1,200 units of affordable rental housing), and one million square feet of employement space.

Work is already under way to build the infrastructure for this new neighbourhood and they should be ready to start building the actual buildings by 2007/2008. The other cool thing about this development is that it is a Green community, (a LEED Gold community), meaning that the Canada Green Building council must certify that all buildings follow green “standards” including green roofs and high levels of energy efficiency.

The primary reason this came to mind is because I was riding along the bicycle path in that area today and I noticed the polluted Don River as well as the construction taking place in that area.

Below I have posted pictures of the proposed neighbourhood as well as pictures of the polluted Don River and a poor duck that has to live in the filth. Apparently the Don River is polluted not from factories/corporations, but from dirty rainwater and from nearby residents using pesticides, salt, washing cars in their driveway, etc. 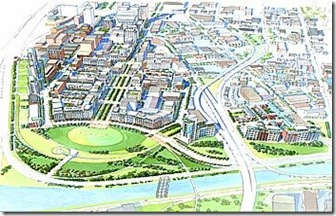 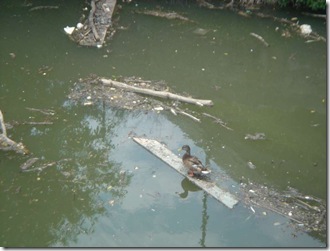 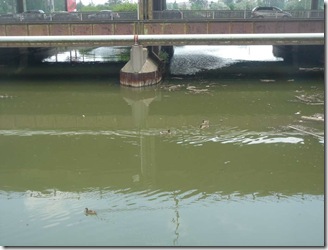 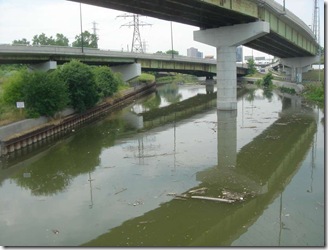