In September 2005, my environmental conscience finally convinced me to give up my gas guzzling Jeep that I had owned for 5 years. It was a tough decision, but I knew it was a responsible decision both from the environmental perspective and a financial perspective. For the last 2 years the ’98 Acura has been treating me well, but many times (especially in the summer) I reminisce about the fond memories in the Jeep.

I could chat your ear off for an entire night with stories about the Jeep so tonight I’ll share a few of them. One of my favourite moments was when a friend of mine in college had a really freaky Halloween mask that resembled the mask from the movie “Scream”. The mask in itself wasn’t what made this funny; it was the fact that he had these oversized green plastic clown glasses that we wore on top of the mask. Just picture a bright red Jeep with no roof and no doors driving beside you and the passenger in the Jeep is wearing a freaky mask with oversized clown glasses. I don’t know if we passed anyone that wasn’t visibly freaked out. Everyone did the double-take and some people’s heart rate probably increased at the very sight of this.

We spent a great deal of time trying to freak out other drivers, and it always seemed to work in the Jeep. I used to have a life-sized cardboard “Mini-Me” (The Austin Powers character). It was hilarious when Tom and I used to strap Mini-Me in the back seat of the Jeep. If people looked when they drove by, they always did a double-take. Words can’t express how funny this cardboard Mini-Me looked in the back seat of the Jeep while driving by; you’ll have to take my word on it.

When Mark and I took the Jeep down to Myrtle Beach in the spring of 2002, we met a couple surfer dudes who would do anything for a laugh. We made the one guy a friendly bet that he wouldn’t get completely naked and ride his skateboard down the strip and do a hand-stand on his skateboard while riding by. The deal was that there had to be cars driving by at the time. So he jumped in the Jeep and I drove him to the starting line. He proceeded to go behind a bush to take off his clothes and then he ran as fast as he could (with his little knickers bouncing all over the place) and he did a full hand-stand on his skateboard completely naked.

Another fond memory was when I used to take the Jeep off road through some trails and end up only metres from the runway at the Hamilton airport. Nothing is more relaxing and exciting than reclining the seat and feeling the wind of 737s Westjet planes approaching the runway not far above your head. I used to go there sometimes alone and just read a book, get a tan and watch the planes land.

I’ll leave you with some pictures of the Jeep in its prime: 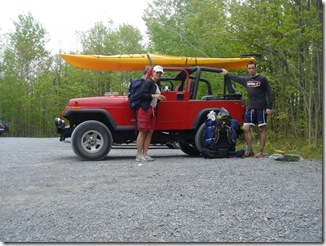 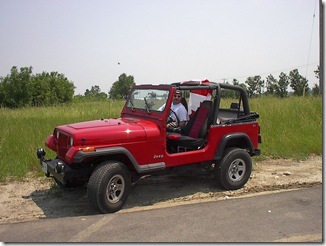 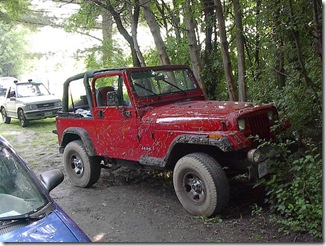 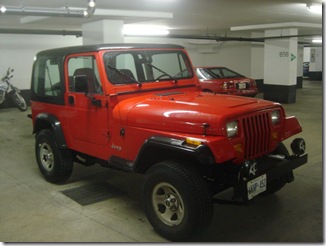 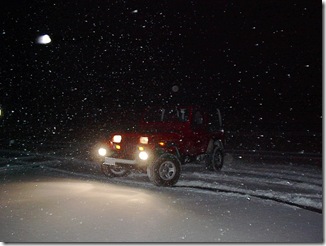 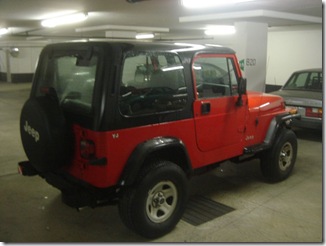