The Future of Online Advertising 2

Dictionary.com‘s new homepage layout captures what online advertisers have been struggling with since the beginning of the Internet: to advertise effectively without impeding users. 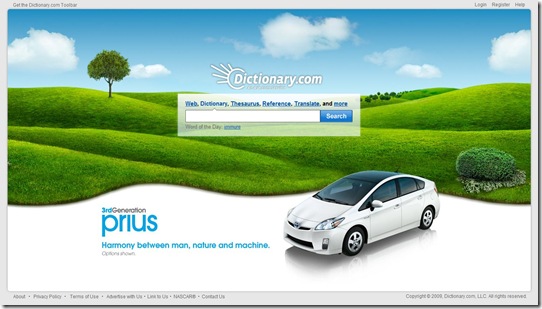 Newspapers have been coping for years with the decline of print circulation. Most people get their news online and newspapers haven’t been able to generate the same level of revenue with their online readers.

It’s not as if the New York Times is losing readers. In 2000 the Times’ circulation was around 1 million, while they now enjoy approximately 15 million unique visitors each month. The issue with online advertising is that advertisers aren’t willing to dish out the big cash. Google AdSense for example pays when a user clicks on an ad, but actual ad impressions without clicks generate very little ad revenue.

My friend Nariman brings up a great point when he says “My eyes are trained to ignore ads; I don’t even see them anymore”. How often do you actually read the little Google “AdWords” advertisements? I know I rarely notice them.

Does anyone actually look at those ugly horizontal banner ads that some sites still use on the top of the page? Not likely.

That’s why websites are trying to seamlessly integrate ads directly into the layout of the page instead of using polarized ad “sections”. The new Dictionary.com layout is a brilliant example of how an advertisement can be integrated into the site and still be unimposing to the user.

Recall the early days of Flash when advertisers would pop up an ad in your face that forces you to click “close” before you can see the content on the page. If a website does this now, I’ll immediately leave the site because I feel violated.

The new Dictionary.com is next to impossible to ignore, but it’s actually visually appealing and it integrates nicely into the layout and overall design of the page. Could this type of advertising solve the problem newspapers are having with generating revenue?

If a newspaper can figure out how to integrate an ad into the page layout of a newspaper without imposing on the user, then advertisers would be willing to pay much more for ad impressions and it just might solve the cash crunch that newspapers are currently facing.

2 thoughts on “The Future of Online Advertising”