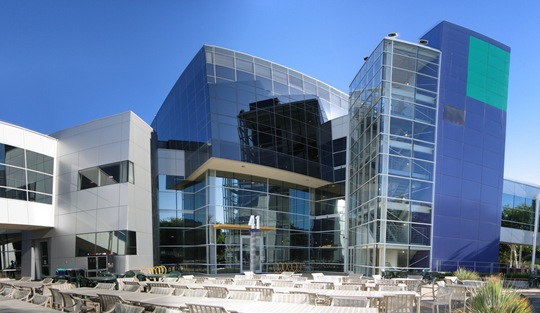 What do the David Suzuki Foundation and Google Inc. have in common? Not much at first glance, but when you look beyond the surface you’ll see many similarities.

Since 1990, the David Suzuki Foundation has been using “science and education to promote solutions that conserve nature and help achieve sustainability”. Google Inc. on the other hand is the high tech firm that strives to “organize the world’s information and make it universally accessible and useful”. Google started out as a Stanford research project in 1996 by two really smart men – Larry Page and Sergey Brin – and now employs over 20,000 full-time employees at its Mountain View, California “Googleplex” campus.

Like the David Suzuki Foundation, Google Inc. is also dedicated to sustainability, and unlike many other corporations, Google doesn’t simply write fancy words about its social responsibility; it is actually taking tangible steps to substantiate its commitment to sustainability.

For starters, at its “Googleplex” corporate headquarters, Google has installed 9,212 photovoltaic panels to supply 1.6 megawatts of electricity, or about 30% of the electricity required to operate the 20+ buildings on its campus at peak times.

Google’s commitment to sustainability manifests from the values espoused by its co-founders. Page and Brin are seriously committed to making renewable energy a reality by investing in sustainability projects – such as Tesla motors electric car initiative, as well as allocating over $1 billion worth of Google shares to fund Google.org, the philanthropic arm of Google Inc. which focuses on environmental and global health issues.

In November 2007, Google.org announced its “RE

Back at the Google campus, hundreds of community bicycles are placed everywhere so that employees can quickly and easily travel between buildings. They also provide a fleet of plug-in hybrid electric vehicles that are used in its free car-sharing program and Google.org’s RechargeIT initiative invests in technology to accelerate the adoption of plug-in vehicles. In a pilot program, Google.org has been able to achieve an amazing 115MPG in a Toyota Prius plug-in hybrid. 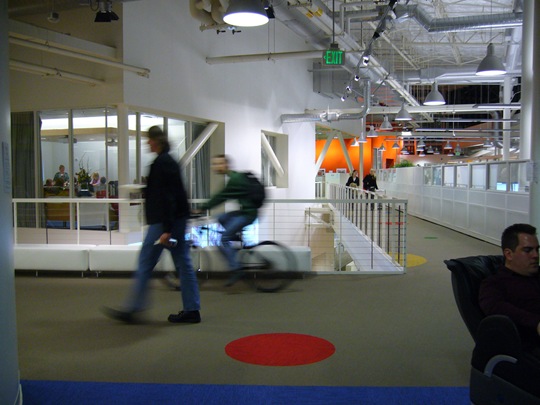 Photo “Hometime at Google” courtesy of yoz on Flickr

When it comes to food sustainability, Google’s campus cafe is partially-supplied by its on-site organic garden and Google’s Cafe 150 provides food grown within 150 miles of the Google campus.

On May 1st, 2009, Google announced it was renting 200 goats from California Grazing as a low-emission approach to mowing the fields on its campus. California Grazing is an environmentally-friendly company that boasts a fleet of 800+ cute goats that provide “holistic land management and brush & weed control through grazing.” According to Google, “It costs us about the same as mowing, and goats are a lot cuter to watch than lawn mowers”.

Inside the Google buildings, Google purchases its furniture and materials that meet the stringent LEED certification as well as the Cradle-to-Cradle certification – an innovative and sustainable method of creating products that we discussed last July. Google also exclusively uses sustainably-harvested wood for construction in its campus buildings. 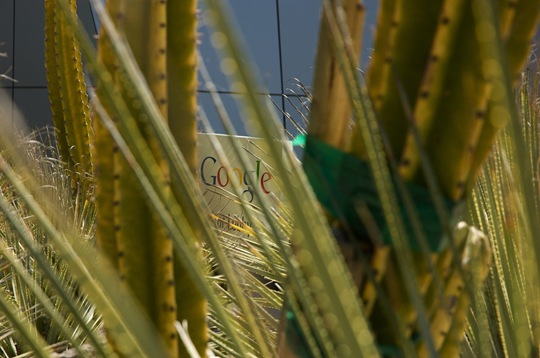 Ten years ago, Google Inc. changed the world with its effective search algorithm. Now its founders are changing how energy is produced and consumed. Google’s environmental initiatives are a reflection of the core ideology found in its young founders and it represents a new level of corporate social responsibility that was virtually nonexistent in most corporations just ten years ago.

I’m excited about what Google’s brilliant minds will be able to accomplish to help the environment; and if I ever need to mow the lawn, I just might consider renting a bunch of cute sheep for a week.