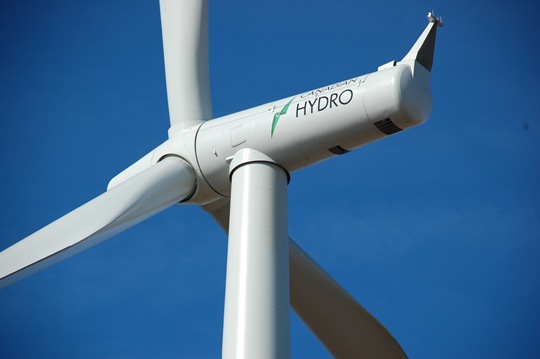 On June 26th, 2009, 86 high capacity wind turbines began operation on Wolfe Island near Kingston, Ontario. Each turbine is capable of 2,300 kilowatts and the expected capacity is more than 593,500 megawatt-hours of clean, renewable energy each year.

I first stumbled across Canada’s second largest wind farm on Day 6 of my Toronto to Montreal kayak adventure last month. It was definitely a sight to see – I was amazed, mesmerized, and extremely excited that such an ambitious initiative had taken place in my province and country.

I was tempted to stop paddling and setup camp among the large turbines, falling asleep to the soft hum of the spinning 45-meter blades. Unfortunately I had a lot of ground to cover to stay on course and make it to Montreal, so I continued paddling on that day without even taking a break on Wolfe Island. 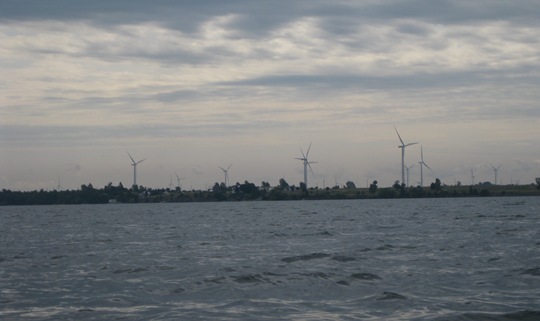 Perhaps the most fascinating and unique aspect of the Wolfe Island wind farm is the method in which the energy is transmitted to the mainland. It uses a 7.8 km long submarine cable that sits on the bottom of Lake Ontario. The cable has a diameter of about 235mm and weighs roughly 736,000 kg. The weight of the cable alone holds it in place on the bed of the lake.

The wind farm’s output – 593,500 megawatt-hours of renewable energy – sounds like a big number. But let’s drill down to see exactly what this amount of electricity is capable of.

In 2005, Canada consumed about 540 million megawatt-hours in 2005 (CIA World Factbook). At a population of 32 million, that’s about 16.74 megawatt-hours/year on average. Therefore, this wind farm is capable of supplying about 35,000 residents with renewable energy each year.

Now keep in mind that Canada has one of the highest average energy consumptions per capita in the world. The United States – although one of the highest energy consumers in the world – only consumed an average of about 12.8 megawatt-hours/year in 2005 per person. Therefore a wind farm of this capacity could support about 46,000 people in the United States.

Wow, that’s a lot of people right? Not so fast. The average Chinese citizen consumed an average of only 2.17 megawatt-hours per year, so this wind farm could provide electricity for 273,502 Chinese citizens each year.

A wind farm with such capacity doesn’t come cheap however. The project was funded by Calgary-based Canadian Hydro Developers Inc. – at a cost of about $478 million with a 20-year supply contract with the Ontario Power Authority. Canadian Hydro also developed Canada’s largest wind farm – Melancthon – located about an hour north of Toronto.

Such a bold initiative doesn’t come without protest. As comical as it may seem to someone who finds wind farms breathtaking, there are those out there who vehemently disagree.

The website entitled “Wolfe Island Residents for the Environment” have their share of complaints about the wind farm. Among their complaints are that the “waterfront views will be negatively impacted” by the turbines. They claim the Kingston Yacht club has major concerns that “these turbines may have negative effects on fresh-water sailing in Kingston” – stating that the turbines are likely to change wind patterns.

They also discuss the impact on migratory birds, the health hazards of the wind turbines and they claim wind power is not reliable or efficient and that these turbines are a waste of tax dollars – stating that European countries are cancelling wind energy development due to the high costs for little benefit.

Unfortunately for them, I do not agree with their assessment, nor do I share their same concerns. I think these wind farms are a great investment and it is worth the extra cost to have clean, renewable electricity. I’m looking forward to the development of more of these wind farms in the near future, and you can count on me to show up in town hall meetings in support of them.