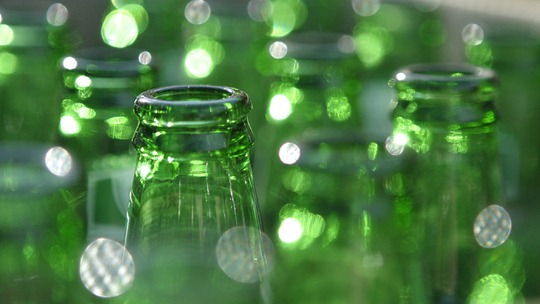 Living as I do in a high-rise apartment, I’ve often been disappointed by the fact that my recycling options have been limited. For example, composting my organic waste is simply not viable since I don’t have a garden, there is no green bin collection scheduled in my area, and I doubt that the users of my local city park would appreciate me spreading a bunch of partly-decomposed garbage throughout the trails.

So this last weekend, I was elated when the city made a municipal recycling program available to my apartment complex – the ElectroVan and HazMobile.

In spite of being named like a pair of ludicrous Marvel-franchise superheroes, the goal of these programs is to extend hazardous household waste and technology-recycling to multi-family dwellings. 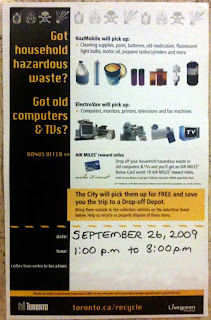 Two large trucks come with trained operators on a weekend and park in an open area adjacent to the numerous high-rises in the area. Residents are given a couple weeks notice to assemble their used paints and solvents or graveyard-ready hardware and are encouraged to walk their wastes to the trucks who courteously take the products away from their owner’s concern.

Not only does this allow for proper capture and treatment of materials that should not find their way into landfills, it reduces the carbon footprint of collecting these materials at the same time!

According to earth911.com, “(e)lectronic waste accounts for 70 percent of the overall toxic waste currently found in landfills. In addition to valuable metals like aluminium, electronics often contain hazardous materials like mercury. When placed in a landfill, these materials (even in small doses) can contaminate soil as well as drinking water.“

For example, cathode-ray tubes used in large, non-flat panel televisions contain between 4 – 8 pounds of lead per unit. Mercury, a highly toxic and carcinogenic element is found in computer batteries and circuit boards. The sad fact is that event very small amounts of lead and mercury in landfill can seep into water tables, and become aggregated through the food chain to rather toxic levels that impact our entire eco-system.

And think about it a little more – I’ve had a dead inkjet printer/fax sitting in my foyer for the past three months, waiting for me to drive it to a computer drop-off depot. That’s a trip of about 20km (there and back) that I and any one of the 5,000 neighbours (I live in a very densely packed collection of high-rise apartments) of mine might make in the course of a year. That’s roughly 35 tonnes of CO2 emissions at an upper limit just to recycle dead electronics!

This week, Mayor David Miller announced that he would not be seeking re-election as Mayor of Toronto. While he has had a fair share of detractors over the six years that he has been Mayor, he has certainly done much to foster a greener Toronto and he has set a high bar for his successors with programs like the ElectroVan and HazMobile.