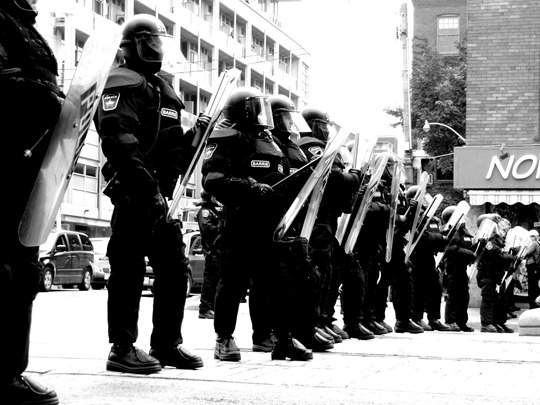 The G20 was a historic weekend where Toronto citizens were duped and our rights were stripped in the name of “terrorism”. Our city and our country failed us on so many different levels, and I can honestly say I’m not proud to be a Canadian right now.

One of the fundamental principles of a democracy is the right to free speech and the right to protest (freedom of peaceful assembly). It is a human right as recognized by several international human rights declarations and constitutions around the world.

Everyone has the following fundamental freedoms:

Congress shall make no law respecting an establishment of religion, or prohibiting the free exercise thereof; or abridging the freedom of speech, or of the press; or the right of the people peaceably to assemble, and to petition the Government for a redress of grievances.

Based on this fundamental human right, there is absolutely no excuse for the conduct of the police forces in Toronto this past weekend.

I observed and participated in peaceful protests throughout the weekend, and was shocked and saddened by the tactics employed by the police and the blatant disregard for our rights.

While a few dozen black-clad anarchists using black bloc tactics vandalized the city, 19,000 fully armed police officers sat back and did nothing to stop it from happening.

Police cars were conveniently “ditched” at important and symbolic intersections, and the cars burned for 15 minutes before fire trucks were event dispatched.

This gave plenty of time for the TV camera crews to broadcast videos of the cars burning, and prove to the world that Toronto was just in spending 1 billion dollars to protect the city.

For context, when the fire alarm goes off in my building, the fire trucks are at my front door in about 5-7 minutes – and this is on a normal day – not a day where every emergency personnel in the city is on call and ready for anything.

Furthermore, when the first police car at Queen and Spadina was finally extinguished, the police and fire personnel left the area and left the second police car in place directly across the street instead of taking it away.

Sure enough, the second police car at Queen/Peter was on fire shortly after. They did nothing to stop it, and intentionally left the car there to be torched.

Canada police agencies also have a history of dressing up undercover officers in black bloc clothing to incite vandalism.

The torched police cars and the aftermath of the property damage was definitely used to the police’s advantage as we found out later when they instituted unlawful searches across the city.

Prior to the G20 weekend, the media announced that the Ontario government had secretly passed a law that permits the police to ignore the Charter of Rights and Freedoms and force unlawful search and seizure and questioning within 5 meters of the G20 perimeter fence – or face arrest.

When I saw police exercising unlawful searches on citizens in public places nowhere near the G20 perimeter fence, it became apparent that it didn’t matter whether someone is within 5-meters or not – we had lost our rights to enjoy our city without being unlawfully harassed by police.

Just yesterday, I spoke to an officer who was conducting unlawful searches of citizens on College street, and he told me that there were dangerous “Black Bloc” protesters throwing rocks in the protest at the Police Headquarters.

Little did he know, I had just been in the middle of the protest group and there weren’t any Black Bloc protesters, and there were definitely no rocks. Everyone was assembling peacefully as we are entitled to do.

I can’t blame the officer though, he was just following his orders and trying to find the “terrorists”.

If the 900 people who were arrested had been lawfully arrested, then the percentage of those who were charged would be much higher than 30%.

Police Chief Bill Blair is also unapologetic to the 600 people who were arrested and held without being charged. From the Toronto Sun:

Many people have come forward in the media claiming they thought they were part of a peaceful demonstration and that they were unaware of any black bloc protesters within the group they latched onto.

“If anybody had said that to me prior to me before mid-afternoon on Saturday (when the violence erupted), I would have accepted that excuse,” Blair said. “After these anarchists and criminals demonstrated their intent by attacking the people of Toronto, by attacking our streets, then there was no excuse for standing shoulder to shoulder with those criminals, to protect them in your numbers.”

The few dozen vandals did their damage on Saturday with impunity. Sunday’s protests were peaceful and the police were arresting people en mass for practicing peaceful protest – which they are entitled to do as declared by the Charter of Rights and Freedoms.

As you can see from the following video, riot police were charging at peaceful protesters to attempt to instil fear amongst the group. Most of these people were just passing by and were outraged at the unnecessary show of force on their street.

The Toronto Police showed the media the “weapons” they had apprehended as part of their crackdown on the “terrorists”. In Chief Blair’s words: “this is evidence of criminal organizations intending on wreaking havoc on our city”

The police had planned this to happen all along. They knew there would be vandalism, they knew their police cars would catch on fire. They knew people would be inclined to stay away from the fence if they broadcasted a fake law. They knew they would be able to violate citizens’ rights if they could blame it on the “terrorists” or the “Black Bloc tactics”.

They knew that they would be able to fire their rubber bullets and blockade peaceful protesters if they allowed the vandalism to take place.

It was planned all along – and we fell for it. It went right to script.

Toronto Star’s Catherine Porter wrote about the “Miami Model” on Saturday – predicting exactly what would go down on the following days.

So far in Toronto, the police show has unrolled according to script; we’ve seen the propaganda, the cache, the intimidation, the secretive new regulations, the scary military arsenal. . . .

Next up, rocks. Will we all believe that one too?

Now that the G20 is over – can I have my god damn rights back?