Cities in Canada and the United States have long catered to automobiles, providing drivers with a comprehensive network of roads with direct routes to their destinations.

Bicycles, as a mode of transportation, have largely been ignored over the last several decades here, and people who use bicycles to get around are often required to choose between uncomfortable, unsafe routes that go directly to their destination. Or indirect, roundabout, long, awkward routes that provide some safety and comfort.

Bicyclists are burdened with finding their own routes to their destination that provide them with some level of comfort and safety.

However, safe comfortable routes that are indirect and difficult to navigate deter people from riding bicycles in the city.

To illustrate this point, I will share a story. This afternoon I received a text message from a friend who wanted to ride her bike 10km to the north side of Toronto.

She was looking for a safe, comfortable route to get to her destination, so she figured (correctly) that I would know a good route to take.

Using Google Maps to gauge how direct a route is

So I pulled out my Google Maps and used the bicycle directions as a starting point. The default route that Google derived was a total of 17 steps to travel 9.6km. 17 turns of direction. 17 different streets.

In this situation, it would behoove Google to provide users with a link to a map-reading and land navigation course along with these overly-complicated directions. 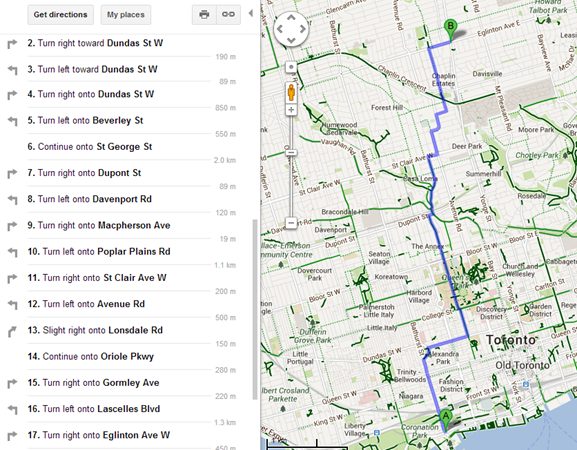 To make matters worse, I tweaked Google’s proposed route to make it more comfortable based on my own experience with riding to that part of town. The resulting route was now a whopping 22 steps for a 10.5km ride: 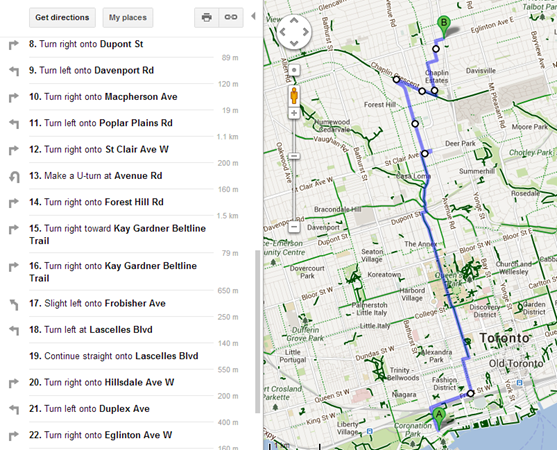 To illustrate how ridiculously and unnecessarily complicated it is to navigate this part of the city by bicycle, we can view the proposed route that a car driver would be provided on Google Maps.

Car drivers are provided a direct route that require only two steps. Two steps compared to the default 17 steps required to do the same trip by bicycle. In the photo below you can see how direct the driving route is. 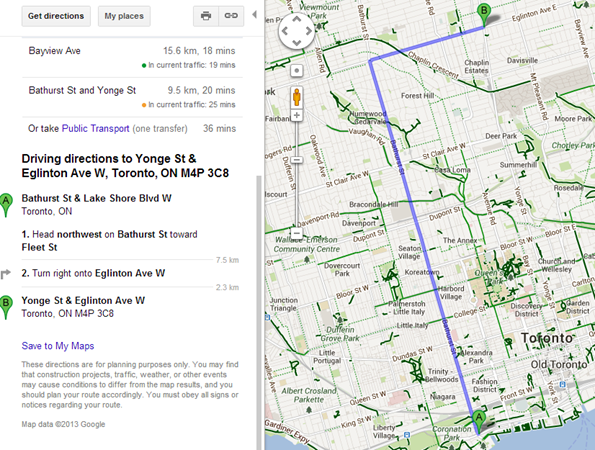 Driving to the same destination hardly requires thinking. A driver could almost do it with her eyes closed, while a bicyclist requires a live navigator in tow.

As expected, the friend was overwhelmed by the 22-step route I sent and decided she would take the unsafe, uncomfortable, direct route to her destination. The direct route would ensure she wouldn’t get lost. But car traffic would be buzzing by her at 60-80km/h in some places.

Perhaps a driver who is in a hurry to get home for dinner would honk at her to move out of the way. Another driver might not be so courteous and pass her dangerously close to send her a message.

After a close call, some bicyclists may never ride again. Others might move to the sidewalk. Others still might stick with bicycling and try to navigate the safer route.

I couldn’t live with myself by letting her ride on a busy urban highway, so I hopped on my bike and showed her the comfortable route. It was a gorgeous day and we had a great ride. Now she is familiar with the comfortable, safe route, with no thanks to the transportation planners in the City of Toronto.

In the Netherlands, bicyclists get more direct routes than drivers

Over in the Netherlands, David Hembrow discusses the importance of direct routes for bicyclists:

“Most cycle routes in this country (The Netherlands) are as direct or (more often) more direct than routes for motorised traffic.”

Providing direct, well-marked routes for bicyclists to make it easy to avoid busy, arterial roads with high speed traffic is arguably as important as any other measure we can take to increase the number of people bicycling in our cities.

Routes that are more direct for bicyclists than motor vehicle drivers provide further incentives for people to take their bicycle and leave their car at home.

My friend could have taken the most direct route on an uncomfortable busy road, but she most likely leave her bike at home the next time she visits this destination. This is exactly what transportation planners should be trying to avoid.

4 thoughts on “Direct Routes For Bicycles”