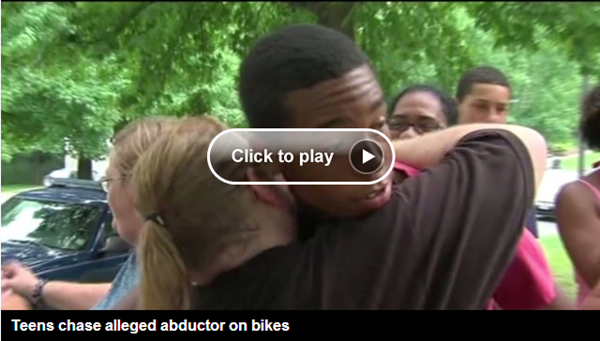 Two teenage boys used their bicycles to chase a car that was carrying a kidnapped 5-year-old girl.

“Two teenage boys are being hailed as heroes after they chased a car carrying a kidnapped girl — on their bicycles.

Five-year-old Jocelyn Rojas was playing in her front yard in Lancaster, Pennsylvania, when she vanished Thursday afternoon. Authorities believe she was abducted by a man who lured her by offering ice cream.

For two hours, neighbors and police scoured the area and asked if anyone had seen her.

Temar Boggs, 15, and his friend took off on their bicycles to search.

About a half-mile away, they spotted Jocelyn in a sedan. But the driver was elusive.

“Every time we’d go down the street, he’d turn back around, and then … we’ll follow him,” Temar told CNN affiliate WGAL.

The two teens chased the alleged kidnapper on their bikes for 15 heart-pounding minutes. The driver apparently knew he was being followed and gave up.

“He stopped at the end of the hill and let her out, and she ran to me and said that she needed her mom,” Temar said.