One in a million 1

Last night we saw Panic and the Rebel Emergency open for 54-40 at Lee’s Palace. When cousin Tony (He’s not really my cousin, we just call him that) was getting dressed to go out last night, I doubt he had any idea that somebody else at the club would be wearing the exact same shirt as him. I looked over at Tony and noticed that less than 15 feet away was a guy with the exact same shirt. This isn’t your common shirt either, so it was quite humourous and coincidental.

On a separate note, there was another guy in the bar wearing a white 2 piece pajama suit with poka dots. It was the most ridiculous thing I’ve ever seen in my entire life. So my cousin Geoff snuck up behind the dude and pulled his pajama bottoms down. It was the funniest thing I’ve ever seen, and the guy was really mad at Geoff for doing this. But c’mon, if you’re going to wear pajamas to a club, you need to have a good sense of humour about it. 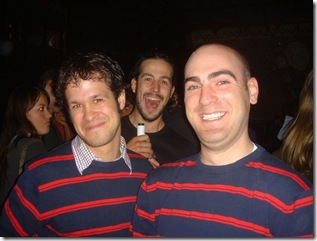