It’s been a while since I’ve written on The Urban Country. I spent last week settling into Halifax, Nova Scotia. For those of you who didn’t know, I’m working in Halifax until November on a work contract. I’ll normally be flying there on Sundays and returning on Fridays; while living out of a hotel during the week. Last week I wasn’t able to update the site because I didn’t have Internet access after work. We have a new laptop on order so I should be back in business within a week or two.

So far I’m really enjoying Halifax. There is something uniquely different about the city. I’m not sure if it was cab drivers telling me their whole life story, or people actually saying hi to me on the elevator, or the fact that you can go to a bar and make friends instantly, or the cab driver who said driving a cab is one of the most dangerous things he’s ever done (While driving on the highway without a seatbelt).

It’s like a whole new world. Everyone is just really really friendly there. People seem to work 9-5 and then go home to their families; so I’m really enjoying the free time after work. I’ve been getting back into the gym and running a bit after being MIA for several months due to my busy lifestyle in Toronto. It’s a nice change from being busy non-stop 18 hours straight every single day. Out there I have a lot more time to relax and make the most out of life. Plus it’s a bonus that there’s always someone there to bring me fresh towels, make me dinner, and replenish my toilet paper supply.

I don’t have much else to report to you at this moment, but I thought the picture below was interesting. I must have a dirty mind because when I first glanced at it from the distance I thought it said “Sex Live Exotic Buttocks” or something along those lines. It was curious to me that they would put such a lewd sign so close to an elementary school. After a closer look I realized what it really said. Maybe sometimes your mind just reads what it wants to read. 😉 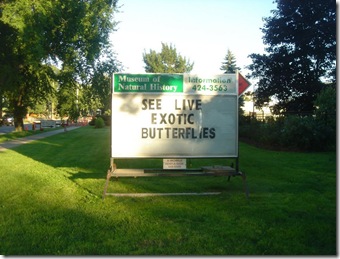