Imagine living in a large house that has all of the luxuries that normal houses have, such as a dishwasher, laundry machines, electronics, etc. except it’s almost completely self sustaining, without relying on city water or the electricity grid.

Twelve years ago, inventor Rolf Paloheimo built a self-sufficient home in Toronto. He invented his own water filtration system that collects rainwater from the roof and filters it for drinking water and dish washing. He then re-filters the water again to be used for the shower, washing machine and toilets.

All of the “solid waste” that goes through the toilets gets composted. The house is powered by a 2,700 watt solar panel system on Paloheimo’s roof. Unfortunately the solar panels aren’t enough to support their entire power needs, so they have to borrow some energy from Toronto Hydro, but his hydro bills are less than $1000 a year.

Poloheimo wants to put wind turbines on his roof to make up for the lacking energy that the solar panels aren’t able to produce, but he doesn’t think the city or his neighbours will allow him to do that, so for now he’s sticking to his current arrangement. Read the full story here for more details. 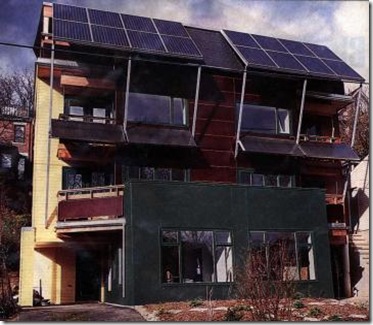