BIXI is ready for Toronto, is Toronto ready for BIXI? 16 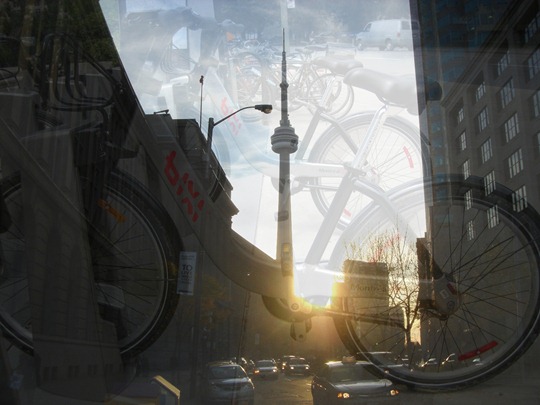 The BIXI system is coming to Toronto – and I can hardly contain my excitement.

If you haven’t already heard, BIXI is Montreal’s bicycle-sharing program which was inaugurated on May 11th, 2009. It cost $15 million dollars to start and began with 300 stations around downtown Montreal with 3000 bicycles for rent. The system was expanded by the end of the summer to 5000 bicycles at 400 stations.

To rent a bicycle, you simply insert your credit card into the solar-powered station to purchase a membership – at a cost of $5/day, $28/month or $78/year. You are then entitled to use the bicycle for free as long as you return the bicycle to another station within 30 minutes. This enables the system to support a high capacity of users on short trips around the city.

After a successful launch in Montreal last May, BIXI has served more than 1 million users – an amazing accomplishment for its first  year.

The system is however shutting down now as Montreal prepares for the ensuing winter. On November 1st, BIXI started taking down the less frequently used stations and BIXI rentals will no longer be available after November 30th – making its triumphant return in May 2010.

But fear not Torontonians – I have been told the BIXI system in Toronto will have no such restrictions! The city plans to keep Toronto’s BIXI system open all-year-round! A detail that has previously not been released and I had to pry out of City Hall.

A recent article on BIXI in Toronto by Walrus Magazine re-ignited my BIXI nostalgia. You see, I had tested out the BIXI system in Montreal in July for 4 days and although the system isn’t perfect, I was amazed at the possibilities it has for cycling culture in Toronto.

The City of Toronto had indicated it would release more details in Fall 2009 in its May 26th Staff Report – but these details have yet to be released.

The Walrus Magazine article unfortunately left me with more questions than it had answered, so I began my own quest to get more information on a BIXI system for Toronto.

Bixi will be implemented at no cost to the city

To address my long list of questions, I started some digging at City Hall to get some more details on how a BIXI system in Toronto will look.

Although the city is keeping the official details under wraps until the final agreement has been approved by council, I was able to get some information from Sean Wheldrake – the Bicycle Promotions Coordinator at City Hall – who was referred to me by Daniel Egan (Manager Pedestrian and Cycling Infrastructure).

Sean explained that the city is still in negotiations, but the plan is to move forward with Public Bicycle System Company (operator of BIXI) to run Toronto’s BIXI system at absolutely no cost to the city. And despite talk of the possibility of using advertising to fund the system, Sean confirmed there will be no advertising used to fund the BIXI system.

Sean also confirmed that the plan is to implement 300 stations scattered around downtown Toronto with 3,000 bicycles to start (the 1,000 number quoted in the Walrus’ article was indeed incorrect). Walrus was correct however in its assertion that the boundaries for the Toronto BIXI system will be roughly High Park in the West, Broadview Ave. in the east, Bloor St. in the north and Lake Ontario in the south.

Once the agreement is approved, all the city has to do is provide the locations of the BIXI stations, and the Public Bicycle System Company will handle the rest.

“On-street parking is not a priority”

Next I wanted to find out what the impact would be on car lanes and parking. As you may know, Montreal turned dozens of parking spaces into BIXI stations – a point of contention amongst Montreal drivers.

Perhaps not surprisingly, the city doesn’t want to head down the path of taking parking space away from drivers. “On-street parking is not a priority”, Wheldrake said.

It makes sense that the city is trying to avoid possible confrontation with certain media outlets in our city that are opposed to cycling culture because they see it as a threat to driving in the city. I however, see cycling as a benefit to drivers because it can help reduce congestion by getting people out of their cars.

Sean admitted that it will be a challenge to find space for the BIXI stations, but he is optimistic that this can be addressed given the easy mobility of the solar-powered BIXI stations that require no excavation.

The major hubs for BIXI in Toronto will be – as expected – Union station, and taller buildings where tens of thousands of people work. The idea is that businessmen and women can hop on a bike to head to a meeting instead of taking a taxi (thankfully the taxi lobby doesn’t have a strong voice in our city).

I see BIXI benefiting everyone from a GO Train commuter, to a tourist, to a downtown resident, to a student. The system allows for quick jaunts from point A to point B in short time while reducing pollution and providing exercise.

BIXI is definitely ready for Toronto. In the coming months we will find out if Toronto is indeed ready for BIXI.

Stay tuned for more updates on Toronto’s BIXI program as the details become available. Sean expects that information will become public in December or January.

16 thoughts on “BIXI is ready for Toronto, is Toronto ready for BIXI?”