Australian Councillor Who Gets It 5

My friend and documentary filmmaker Mike Rubbo recently made a very inspiring short film that captures a day spent with Australian city councillor Jackie Fristacky. Jackie is a city councillor in Yarra City area of Melbourne where she previously served as Mayor in 2005-2006.

What sets Jackie apart from your typical city councillor is that she commutes to city hall on her bicycle and travels to meetings using pedal power.

In the video, Mr. Rubbo rides the train from his home in Sydney to Melbourne to spend a typical day with the Australian councillor.

In some European cities, it might be normal for a city councillor to ride her bike everywhere – but in Australia (and likewise here in Canada) Jackie is considered a rare breed.

Jackie has helped lead the push for Yarra City to boast the highest rate of cycling in all of Australia – at just under 10%. Imagine what Jackie could accomplish if Australia rescinded its helmet legislation. 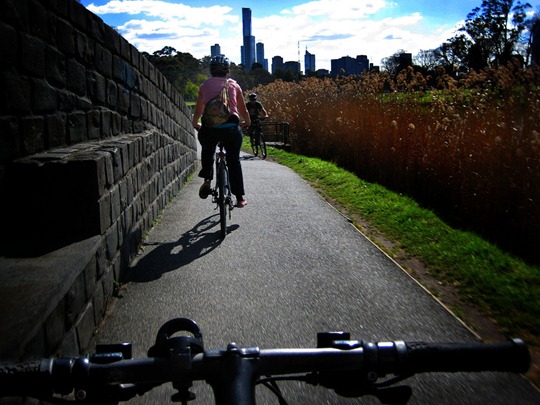 Photo – Riding into Melbourne along the Yarra River by Looking Glass

In a follow up e-mail, Jackie lists the reasons for such growth in cycling in her district (for a more detailed list, please visit Mike Rubbo or David Hembrow’s blog)

This list could easily describe my city – Toronto – with the notable exception that we don’t have bike paths on virtually all roads.

With municipal elections coming up in October here in Toronto, and a mayoral candidate who wants to rip out existing bike lanes and ban bicycles on main arterial roads, we could use a pro-cycling councillor like Fristacky.

Mike hopes that his video will provide a model for other city councillors to follow to improve the rate of cycling in their cities – so please send the video to your local councillor or any councillor who may be interested.

Jackie can also be contacted directly if you would like to ask her for more details on Yarra:

If nothing else, send Jackie a quick note to tell her how inspiring her story is for other countries going through similar struggles that Australia currently faces.

5 thoughts on “Australian Councillor Who Gets It”