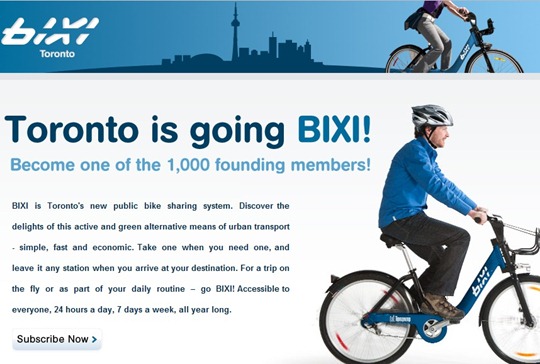 BIXI is coming to Toronto – for real this time. Well, unless it gets cancelled again. But it seems more real this year than last year – for real.

I’m proud to say that I am now one of the 1,000 “founding members” of Toronto’s BIXI program. For less than a monthly metro pass, I in turn receive a full-year bicycle rental membership with BIXI – granting me the right to use BIXI bicycles for free for up to 30-minutes for an entire year.

I attended the “BIXI bash” last Wednesday at the Gladstone hotel, but the BIXI folks were too busy signing up other enthusiastic new BIXI members – so I opted to do it online instead.

I have been an ardent supporter of BIXI since I took Montreal’s BIXI’s out for a test ride in July 2009. Despite its early flaws which I pointed out in that article (most of which have been rectified), I found the system to be a great step forward for urban cycling.

The concept is amazing – almost everywhere you look you can find a BIXI bike station waiting for you to hop on and instantly and magically become an urban utility cyclist without worrying about whether your bike will be stolen, or dealing with that flat tire that you haven’t got around to fixing for a few weeks.

Or perhaps you live in the suburbs and travel by train or public transit when you go downtown. BIXI will be there waiting for you too like a great friend who is always there to pick you up at the airport.

Or maybe you don’t even own a bike – don’t worry, BIXI won’t hold it against you.

And I’m not the only one who thinks BIXI is a great idea – the program has exploded to cities around the world, including Melbourne, Boston, Washington, and Minneapolis. Most recently, BIXI launched in London, UK with more than 6,000 bikes at 400 stations for its first phase.

Toronto isn’t a city that likes to stay ahead of the curve, so we are “playing it safe” by only investing in 1000 bikes at just 80 stations. My hope is that the lack of bikes won’t impede on the convenience of the system in this city of 2.5 million people.

Paris, not commonly known as the most bike-friendly city, with a population of about 2.1 million in the city centre has 20,000 bicycles available at 1,639 stations with its Vélib’ system. 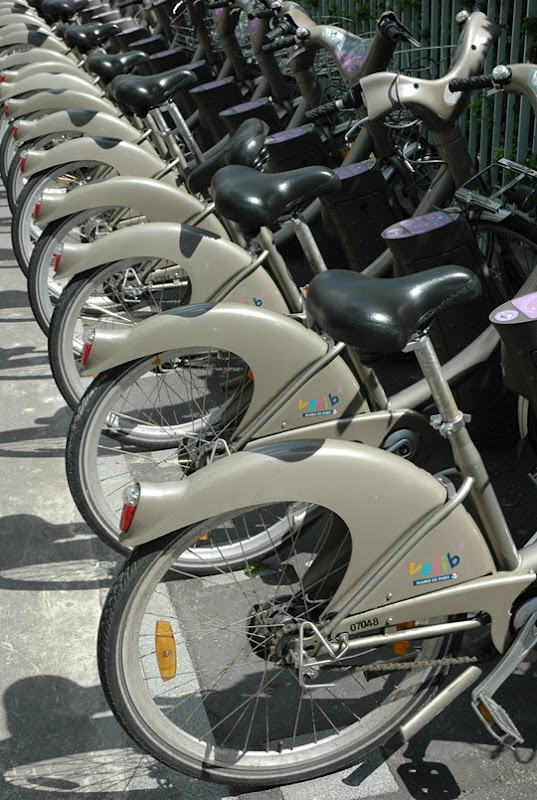 Fellow cycling blogger David Hembrow points out that bike sharing schemes won’t have a significant impact on transforming a city into a cycling culture in a recent article. True, bike sharing schemes aren’t the silver bullet that will change a city overnight, but their presence alone can help bikes become a more accepted mode of transportation.

David’s silver bullet solution is to invest in the infrastructure that can help people be safe (and feel safe) while riding a bike. But in many North American cities, the majority of the population don’t accept cycling as a mode of transportation and are against investing in cycling infrastructure if it has an impact on our current road design – people don’t like change here.

So while I will continue to push for better infrastructure – because I agree with David that infrastructure is extremely important – I will also support and promote investing in a bike sharing scheme because I believe it will help bring urban utility cycling to the forefront of people’s minds.

Regarding Toronto’s BIXI program, reader James Mallon commented in April that Toronto’s motto is “aim low, and miss”. In reality, I hope the motto for BIXI will become “aim low, and expand”.

You know, It could be worse – we could be dealing with a an ineffectual helmet law as they are in Melbourne.

5 thoughts on “BIXI Coming to Town”