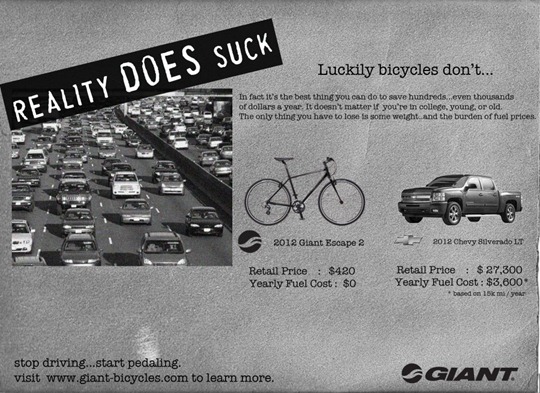 Giant Bicycles has responded to GM’s anti-cycling advertisement by coming up with an ad of their own. It reads:

“Reality DOES Suck. Luckily bicycles don’t… In fact it’s the best thing you can do to save hundreds… even thousands of dollars a year. It doesn’t matter if you’re in college, young, or old. The only thing you have to lose is some weight.. and the burden of fuel prices”.

The ad doesn’t even need to mention the insurance costs, parking costs, depreciation, repairs, registration, or maintenance. Or the fact that Americans work 2 hours each day just to pay for their cars.