Toronto Police: To “Serve and Protect” Whom Exactly? 11 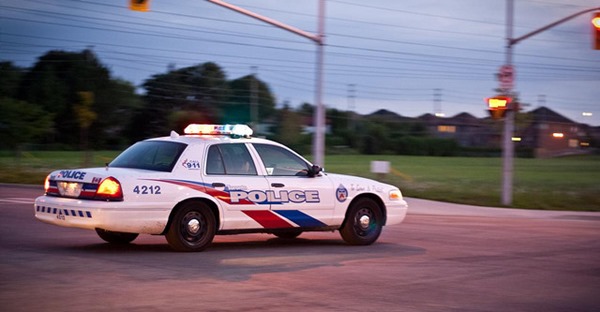 The Toronto Police Service, with its long history of blaming the victims when it comes to traffic fatalities, has kicked off its latest blame the victim campaign, which it is calling “Do the bright thing”. The campaign urges pedestrians to wear fluorescent clothing so that distracted drivers will have a better chance of seeing them before running them over and killing or maiming them.

This blame the victim style campaign is nothing short of an utter admission of failure in the Toronto Police Service’s ability to protect its citizens. By placing the blame on the most vulnerable road users, drivers are off the hook and can continue to drive distracted and/or too fast, while pedestrians bear the full weight of protecting themselves.

If the Toronto Police were doing their supposed job of “enforcing” traffic laws, they needn’t blame the victims. Urging pedestrians to walk around like Christmas tree ornaments does not get to the root of the problem. Careless, distracted and dangerous driving is the root cause of the majority of the ~100 or so pedestrian fatalities in Ontario each year, and walking around as a human light bulb is not going to fix that.

To Serve and Protect

The Toronto Police Service motto is “To Serve and Protect”. But who exactly are the police serving and protecting, if not but themselves?

When Toronto’s Mayor was caught reading while driving on the highway last year, the Toronto Police shrugged it off and concluded that he wasn’t doing anything illegal.

Let me re-iterate and emphasize this: The mayor was driving a large SUV on the highway while traffic was flowing at 70km/h and he was reading a document behind the wheel.

How did the Toronto Police Service respond?

[Traffic Services spokesperson] Const. Clint Stibbe said the police “certainly don’t condone” reading while driving but that doing so is not a “chargeable offence” in and of itself.

“Let’s say somebody is reading a book. Their vehicle goes out of control and strikes somebody, or can’t stay in the lanes, constantly going from one lane to another, no signals, a conglomeration of issues. Then you could look at a charge of careless,” he said.

So if the mayor is reading a book while driving, and his vehicle veers off the road and potentially kills somebody, *then* you could “look” at charging someone.

You know car culture has infiltrated a country when it’s legal to read a book while driving, but riding a bicycle with just one hand is against the law in the city.

The mayor reading incident could have been a perfect opportunity for the Toronto Police to educate the public on the potential consequences of distracted driving. The mayor put other people’s lives at risk, and there is no excuse for that.

At least former Toronto Police Traffic Services spokesperson Tim Burrows had the good sense to scold the mayor for his actions:

“On behalf of all the citizens of Toronto that value road safety, Mr. Mayor … please get a driver. It is obvious that you are busy enough to require one and no amount of money you are saving by not having one is worth the life of one of your citizens,”

As long as our society continues to view the ~100 pedestrian deaths each year in Ontario as nothing more than collateral damage, nothing will change.

Until the Toronto Police decide to stop protecting themselves and our car culture, our most vulnerable road users will continue to be unprotected and hundreds more people will continue to die on our streets for nothing more than allowing drivers to get home just a little bit faster.

Careless, distracted driving needs to end, and the Toronto Police Service must do its part to both enforce the traffic laws and educate drivers on the consequences of their actions.

Expending its finite resources on blaming the victims ignores this reality and only serves as evidence of an organization failing to sufficiently protect its citizens.

11 thoughts on “Toronto Police: To “Serve and Protect” Whom Exactly?”