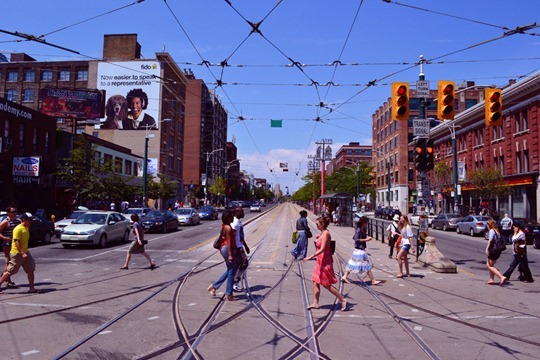 Pedestrians on Queen Street in Toronto – photo by deena mephistopheles

Linwood Barclay from the Huffington Post Canada wrote a brilliantly hilarious satire piece about how pedestrians are infringing on drivers’ right to unimpeded access to our streets.

Say what you will about Toronto Mayors Rob and Doug Ford, their latest proposal really has a lot going for it. “The Happy Car: A Five-point Plan to Keep City Vehicles Safe from Pedestrians” really nails it, as far as I’m concerned.

The Fords understand that happy cars and happy drivers make for a happy city. And while there are any number of things that can contribute to the unhappiness of a car and its driver — high gas prices, tree sap, bicycles — the pedestrian is right there at the top of the list.

Paying a buck and a half for a litre of unleaded is only annoying when you’re at the pump. Tree sap’s only a problem if you’ve parked on a tree-lined street. And bicycles, well, okay, they are a frequent pain in the butt, but they’re still distant second to pedestrians.

Barclay points out how ridiculous it is for pedestrians to think they have a God-given right to cross the street on a walk signal:

Yes, actual human beings wandering around Toronto wherever the hell they want claim the top spot because you ALWAYS having to keep your eye out for them. I don’t know how many times, while nipping around the city, I’ve been unable to tap in the last word of a text message because someone was sticking his hand out at a crosswalk.

On a more serious note, two women pedestrians are now fighting for their lives after being hit by cars in two separate incidents in Toronto yesterday. I posted a note about this on Twitter and captured some of the reactions here: 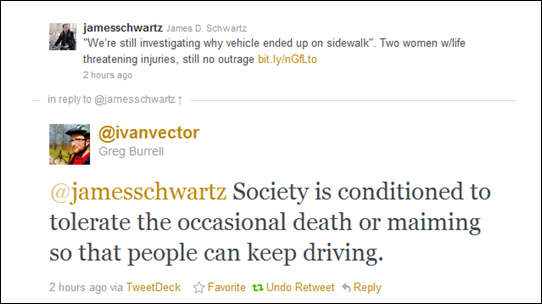 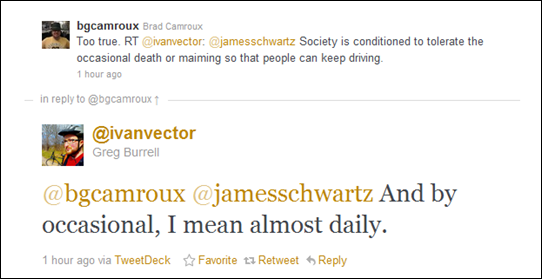 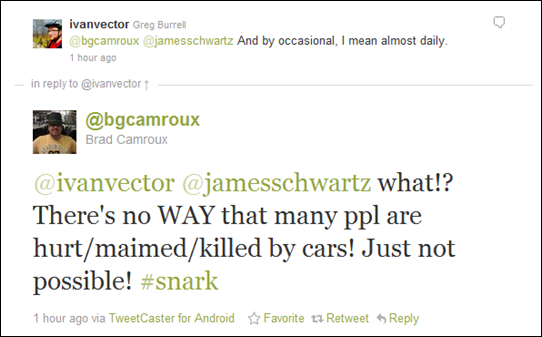 10 thoughts on “Time to Protect Cars From Reckless Pedestrians?”