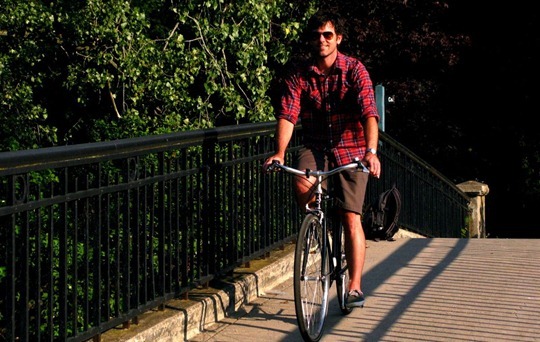 31-year-old Robert Lawson hadn’t owned a bicycle since he was a 14-year-old teenager growing up in Vancouver, Canada. Three months ago – four years after he first moved to Toronto – Robert, a Senior Policy Advisor for the provincial government, decided to buy a bicycle. Little did he know at the time how much freedom and enjoyment he would get from purchasing something as simple as a bicycle.

I wanted to learn more about Robert’s journey from being a car owner and public transit commuter to ditching his car, his public transit pass, and using a bicycle as his primary mode of transportation. So I asked him a few questions.

Robert lives in an area of the city where the streetcars do not have priority over automobiles, so long lines of cars would bring the streetcar to a halt when Robert previously used public transportation to commute:

“I’ve become increasingly frustrated with the TTC (Toronto Transit Commission) as my primary mode of transport for commuting to work and social activities. I find streetcars, in particular, to be inefficient, unreliable, uncomfortable, and often overcrowded. I get particularly annoyed about the amount of time it takes to get places I want to go and often not being able to get to those places on time due to street traffic, erratic streetcar frequencies, unforeseen delays, etc.”

This frustration with public transit was one of the reasons Robert decided to rid himself of his car and buy a Linus Roadster bicycle this June (although he admits he doesn’t mind the extra $4,000 a year that it puts in his pocket).

Being stuck inside a streetcar also left Robert with a void and he yearned for the outdoors:

“I also missed the enjoyment of being outside. I lived in Kingston for five years prior to living in Toronto and I walked everywhere. Walking allowed me to enjoy the fresh air, have some measure of solitude on my travels, help me stay fit, and ensure I could accurately regulate the amount of time it took me to get to where I wanted/needed to be.

For these reasons, purchasing a bicycle made a lot of sense. I figured it would allow me to set my own schedule, escape the discomfort and overwhelming crowds on streetcars, get more exercise, and provide an opportunity to spend more time outdoors again.”

When asked why he chose that particular bicycle, Robert answered:

“The Linus appealed to me for practical and aesthetic reasons. It wasn’t too expensive for my budget ($649 new for the model I chose), it has a comfortable seating position for commuting, it’s versatile enough to get me around the city (I chose the three speed Roadster), it is easy to maintain (the internal gear hub was particularly appealing for this reason), it came with fenders and a rack, it’s lightweight, and I think it looks cool. “ 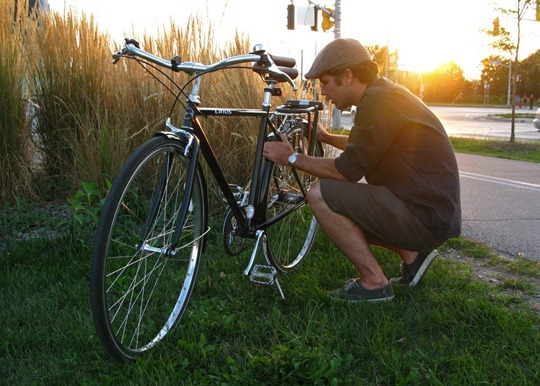 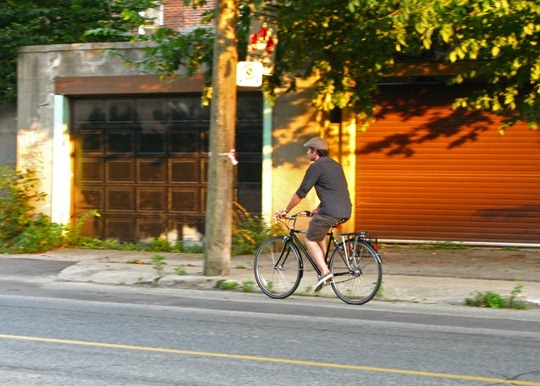 For others who are considering making a similar move, Robert offers this advice:

“I would say, most emphatically and enthusiastically, to do it. Riding a bicycle has dramatically improved my life as a commuter and has made getting around in my free time considerably more enjoyable, too.

I would also say that it’s important to consider carefully what kind of bike you’re going to ride. I think that in order to get the most out of your experience cycling you need to find a bike that fits you properly, suits your own particular needs, style and tastes, stands up to the demands you’ll place on it, and, most of all, seems like fun to ride.”

Robert points out that learning to ride again after many years comes fairly quickly:

“I’ll admit that the first few minutes on my new bike were a bit awkward, mostly in terms of keeping my balance when pushing off from a stop. Although I try to avoid indulging clichés it is true that riding a bike is a skill you never forget. I found that I was comfortable again after less than fifteen minutes.

I would say that reaching a satisfactory level of awareness on the road does take some time. Getting used to how much space you have/need, how much space cars, in particular, are willing to give you, and being aware of the actions and tendencies of cars/cyclists/pedestrians around you requires time and experience. I’m still learning.”

When it comes to motorist/cyclists relations, Robert soon discovered the animosity that we see on Toronto’s streets and hopes that we can overcome these challenges to make bicycling in Toronto more comfortable in order to attract more people:

“Generally speaking, I think my daily riding would be much more comfortable if motorists were better educated about the rules of the road pertaining to cycling and, in particular, safely sharing space with cyclists. Too many drivers convince themselves that cyclists have no right to be on city streets and, therefore, have no qualms about abusing them (verbally or physically) when they feel inconvenienced by or annoyed with cyclists.”

“More than anything else, I would like motorists to consider and appreciate the fact that human beings with families are riding bicycles. We shouldn’t have to fear for our lives simply because we’ve made a decision to get to work, school, or social activities by means other than a motor vehicle.”

Welcome to the world of urban utility bicycling Robert! I hope you bring others along with you. Hopefully our ‘i share the road’ campaign will help in some small way to improve relations between motorists and bicyclists, too.