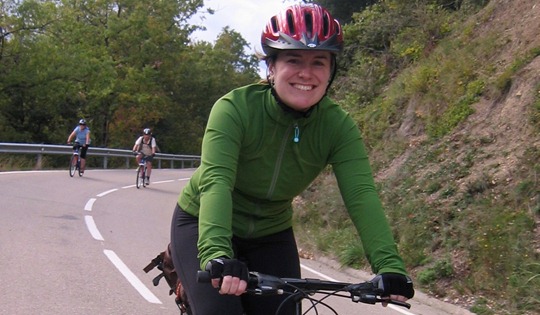 2010 has been an interesting year. I have had countless friends and acquaintances come up to me and ask me for advice on where to get a bike, or how to find the best route to work. The number of cycling “newcomers” has been astounding, and it gives me hope for the future of cities in North America.

The latest cycling newcomer is Kerri McKenna. On July 21st, Kerri sent out an email to get some advice on where to buy a bicycle and how much to spend. Kerri was fed up with her 1 hour commute via public transit, and she knew it would take less time riding a bike.

What Kerri did not perhaps realize is all the other little benefits of riding her bike – like enjoying the view of the lake for example.

We interviewed Kerri to find out how her world has changed since she started using the bicycle for transportation:

How did you commute to work previously? How long did it take you?

[KM] I was a devotee of the TTC (public transit) – and didn’t mind it at all. But I recently changed jobs to a location about ½ a kilometre from the Entertainment District (where I used to work) and my 45 minute commute changed to 60-75 minutes. The extra 15-30 minutes seemed ludicrous and is what caused me to start thinking about riding.

How long does your new commute take you by bike?

[KM] I am thrilled to say that I have cut my commute time down to 40 minutes + 10 minutes to change clothes at work. Although I would consider this still close to an hour, I can at least say that exercise is part of my daily routine.

What triggered the decision to start riding your bike to work?

[KM] It was the commuting time added on by moving to a new office location. Even though driving cut my time down substantially, I knew that illogical traffic jams and construction could still be counted on to make my commute vary from day to day.

How comfortable is your bike commute? Have you encountered any bad roads that you try to avoid?

[KM] I ride along the path (Martin Goodman trail) on the eastbound Lake Shore to Front/Bathurst – so it’s great. Before my first official bike to work, I tried the street routes (Annette > West Toronto Bike Rail Path > Dundas > Queen > Bathurst) and felt a bit nervous. But the dedicated paths along the lake make my commute easy and enjoyable.

[KM] Hands-down, it’s enjoying the views of the lake in the morning and in the evening.

[KM] I attached a basket to the back of my bike and I don’t know what I would do without it! I store my clothing and laptop in it to and from work, but also use it to pick up groceries and dry cleaning on the weekends and in the evenings. It’s invaluable.

Where did you pick up your bike? How much did it cost?

[KM] I didn’t want to spend a lot of money at the outset because I didn’t know if I would like cycling or stick with it. My parents kept an old bike my brothers and I used throughout high school, and my dad was only too happy to finally get it out of the garage. We got it tuned up and I purchased a new seat, bell and the basket. My initial outlay was $150-200 – which was in the range that I wanted to spend. In the Fall I will have to purchase lights, but after that my setup should keep me going for a while.

[KM] Just try it – cycling really allows you to experience the city in new ways. The addition of new bike lanes throughout the city really helped persuade me that I could do this and not be nervous about all of the cars. As a driver in the city, I know how crazy they can be! I don’t see too many other people with baskets, but I would encourage people to think about getting one because they enable you to run all kinds of practical errands, rather than just riding to and from places.

Have you become an overnight advocate for better infrastructure? Have you joined the Toronto Cyclists Union yet to advocate on your behalf?

[KM] I don’t think I’m there yet. I noticed the Toronto Cyclists Union just this week – they had a tent set up along the Lakeshore. I had no idea that such a group existed, although I shouldn’t be surprised. There really seems to be a strong community of cyclists in Toronto, and I expect it will continue to grow as the city expands its infrastructure.

Is there a model city that you have visited in which Toronto should get ideas for better bike infrastructure?

[KM] I haven’t consciously noticed this aspect when I have travelled but I’m sure I will now. The Bixi program in Montreal seems interesting, and I hope it takes off here.