Taking Our City Back 2 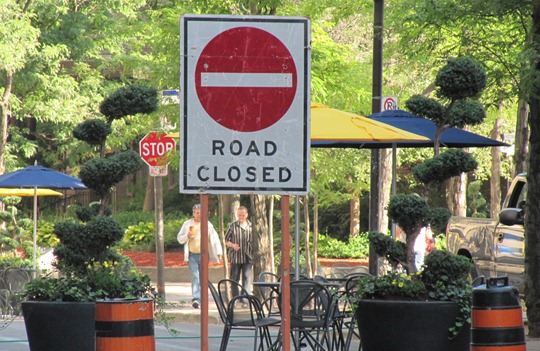 The new pedestrian-only areas reside at Gould/Victoria streets at Ryerson University, and Willcocks street between St. George and Huron at the University of Toronto campus.

Early Saturday morning, workers were setting up the tables and chairs at the new Ryerson University pedestrian-street. With the school year starting imminently, this public space will be bustling in no time. 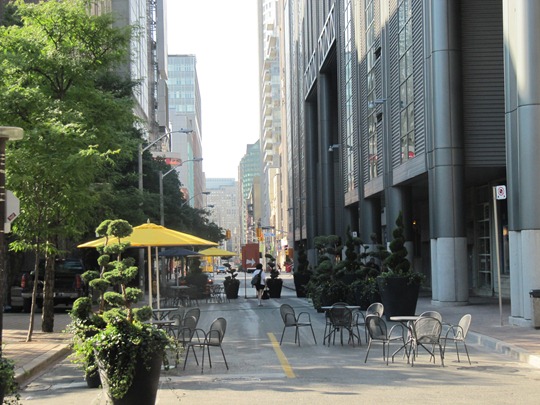 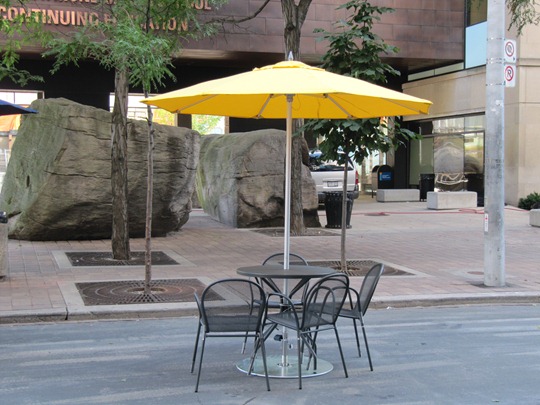 The downward trend of accommodating the automobile at all costs began in 1955 when construction on the Frederick G. Gardiner Expressway first began. The Gardiner Expressway divided neighbourhoods from the lake, tore down hundreds of homes, destroyed park space, an amusement park and even threatened to destroy Toronto’s historic Fort York.

Toronto continued to cater to automobiles in the years – and decades – after the completion of the Gardiner. Luckily a group of protesters led by Jane Jacobs helped prevent the north-south Spadina Expressway from being completed. It’s abominable to imagine how many wonderful neighbourhoods would have been destroyed by the expressway along Spadina Ave.

Despite Toronto’s victory in preventing the Spadina Expressway from being built in 1971, many people still believe that Toronto needs to build more highways to accommodate the growing suburbs.

But I struggle to comprehend the logic in envisioning Toronto to be more like an American city – with vast networks of highways across the city, but a lack of neighbourhoods within the city. Building more highways begets more traffic.

Toronto’s population has steadily grown over the last 30 years (Metro CMA population is more than 5 million people), while the number of highways has virtually stayed the same. When roads approach their capacity, people find other ways to get to the city (public transit, bikes, commuter trains, etc). Similarly, when new roads are built in a large city, they quickly fill up to capacity – as evidenced in big cities like Los Angeles, Beijing, or New York. 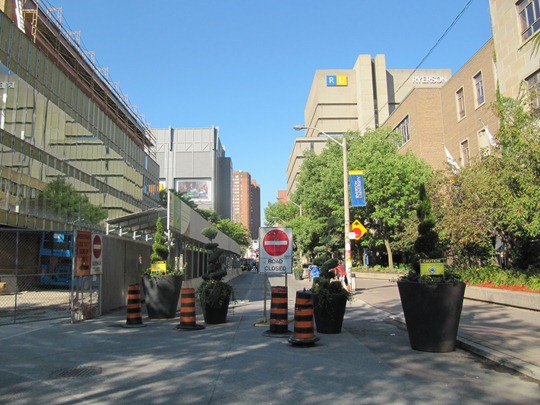 2010 marks a new decade and a new era for Toronto – and other cities in North America. The new trend is to start giving space back to citizens by building Complete Streets and pedestrian-only zones to enhance the urban realm and improve the experience for citizens and visitors alike.

New York drastically improved its Times Square by simply blocking traffic from entering a section of Broadway Ave and throwing up a few tables and chairs. Similarly, one of Montreal’s most thriving streets is the pedestrian-only Prince Arthur street.

Though these pedestrian streets may seem foreign to many North American cities, they are par for the course in European cities. But we have a decades-old addiction to the automobile, and the first step to curing an addiction is to first acknowledge that we have an addiction. Once acknowledged, we can begin to cure it.

The Ryerson pedestrian-only space might be 20 years overdue, but it is certainly a step in the right direction.

Stay tuned for a follow-up article after the school-year commences and the pedestrian street thrives.

2 thoughts on “Taking Our City Back”