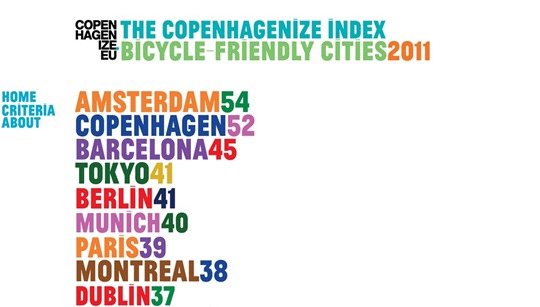 The Copenhagenize Index of Bicycle-Friendly Cities 2011

The Danish firm Copenhagenize Consulting recently released its list of the top 20 bicycle-friendly cities in the world for 2011. The “Copenhagenize Index” as it’s called, puts Amsterdam in the #1 spot, scoring 54 out of a possible maximum score of 64, with Copenhagen itself placing second with a score of 52.

The Copenhagenize Index uses a criteria based on 13 categories, and each city receives a score 0 to 4 for each criteria with a chance to win 12 bonus points for “impressive efforts or results”. The 13 categories include:

On a personal level, I was glad to see these results released, because in 2010 I had drafted the original criteria which was used as a starting point for the Copenhagenize Index.

A substantial amount of work has been done by Copenhagenize Consulting since I first pitched my criteria to Mikael in June 2010. The team has further refined the criteria to make it more credible and a great deal of work has gone into gathering the statistics.

The initial criteria that I drafted contained just 5 categories and a maximum score of 10 for each category. I based my scoring system on the level of the Capability Maturity Model – a model that measures an organization’s software development processes (my day job involves software development).

Here is a snapshot of the original criteria I pitched to Mikael: 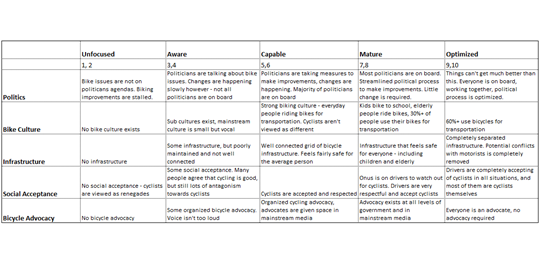 It is great to see that Mikael and his team at Copenhagenize Consulting have turned this initial criteria into a comprehensive criteria for ranking cities around the world for their acceptance of the bicycle as a viable and respected mode of transportation.

I hope to see more cities competing for these top spots in the coming years as we push for the bicycle to become a socially acceptable mode of transportation in western societies.