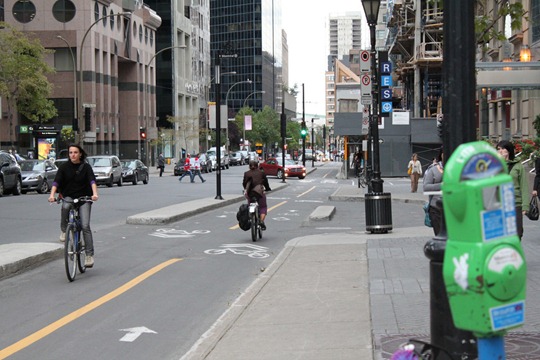 A new study finds that bicycling is on the rise in Montreal. In 2010, the city experienced a 35-40% growth in ridership over its 2008 bicycle ridership counts.

This is an encouraging sign that the city’s significant infrastructure investments and bike sharing scheme have contributed to an increase in utilitarian bicycling.

Montreal is one of North America’s top destinations for urban bicycling, with more than 500km of recreational and on-street paths. In May 2009, Montreal’s bike sharing system “BIXI” launched – setting the stage for BIXI to spread all around the globe.

The Montreal ridership numbers come from a study by Professor Luis F. Miranda-Moreno – from the Department of Civil Engineering at McGill University. The purpose of Professor Miranda-Moreno’s study was to find correlations between the weather and ridership in Montreal.

The hourly counts were taken using 5 bicycle counters situated along 4 on-street, physically separated bike facilities in the City of Montreal from April 2008 to July 2010: 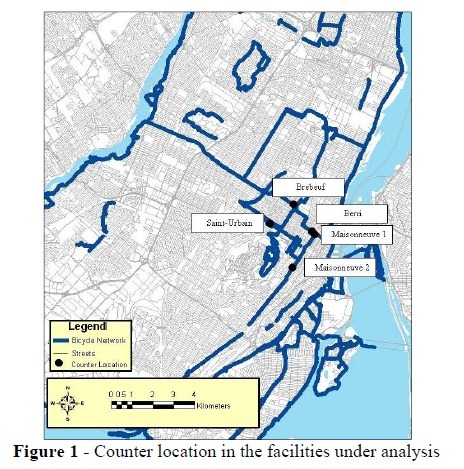 Interestingly, the study found that when temperature doubles, a 43-50% increase in ridership can be expected. However, when temperature reaches 28 degrees Celsius, and humidity is more than 60%, the bicycling numbers start to drop.

This type of study is rather unique in North America. The relationship between weather and travel has been studied intensively for most other modes of transportation other than cycling – including motor-vehicle traffic volumes, transit ridership, and pedestrian volumes.

It’s refreshing to see this data being captured for bicycles because it can help traffic engineers understand trends that encourage or discourage citizens from using a bicycle for every day transportation.

The following diagram illustrates the increase in ridership levels from 2008 to 2010: 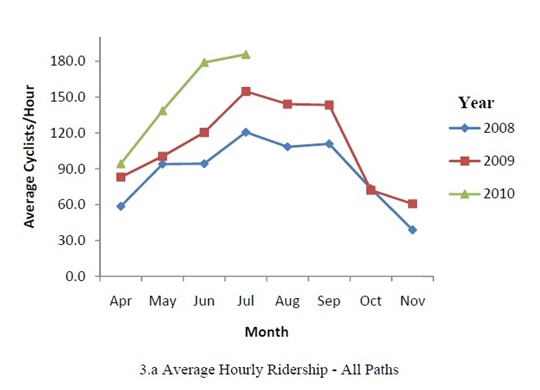 Here is an interesting diagram that illustrates the hourly patterns of bicyclists throughout the day, with the morning peak at 8AM, and an afternoon peak at about 5:00PM: 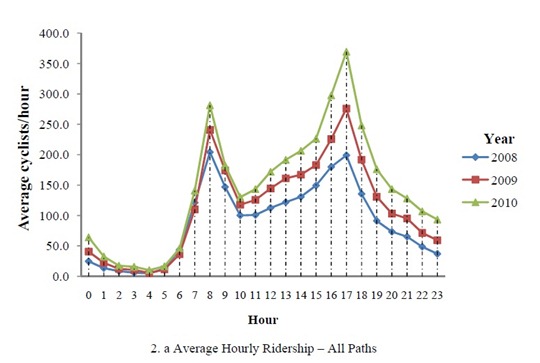 The data in the study shows that ridership was comprised primarily of utilitarian bicycle commuters – as evidenced by weekend daily ridership being 65 to 89% lower than the slowest week day (Monday).

Montreal’s investment in bicycles as a mode of transportation is paying off as we can see from the ridership numbers – while citizens get to enjoy healthier active lifestyles, and less pollution in the air.

If Montreal continues to invest in its citizen bicyclists, we should expect the ridership to continue to rise going forward. If a cold-climate city like Montreal can do it, then so can any other city in North America.

Here are some other interesting observations found by the study:

To obtain a copy of the full study, feel free to contact me directly. Special thanks to distinguished author & (former) journalist Daniel Sanger – who graciously provided the study.