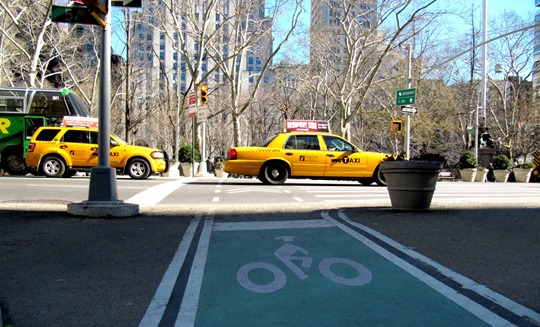 New York City had announced its ambitious plan in 2006 – and completed its implementation in 2009. Further progress has extended beyond 2009, and in the past four years, the city has implemented more than 400km of bike infrastructure.

All it took was a vision, and the will – two things we are desperately lacking in Toronto, Canada these days.

“He’s taking away my rights as a driver,” Leslie Sicklick, 45, said of Mayor Michael R. Bloomberg. Ms. Sicklick, a dog walker and substitute teacher, grew up driving with her father around the Lower East Side, where she still lives.

Somehow I don’t have any sympathy for Ms. Sicklick. There are still plenty of lanes for automobiles in New York City.

Streetfilms posted a wonderful film last month where New York’s Department of Transportation (DOT) explains the different types of bike lanes that have been implemented throughout New York City over the past few years.

The film features the Project Managers who were tasked with implementing bike infrastructure explain the thinking behind each type of bike lane that New York has implemented:

The film brought back fond memories of when I last visited New York in March. I remember one particular crisp, beautiful Sunday where my friends George, Mark and I were riding around the city for the better part of the day.

While riding under the Brooklyn Bridge, I was loudly singing Frank Sinatra’s “New York, New York” to the echo of the underbelly of the historic 1883 bridge.

If I can make it there

It’s up to you

I want to wake up in that city

And find I’m king of the hill

Head of the heap

King of the hill

Oh how I adore you New York, New York.