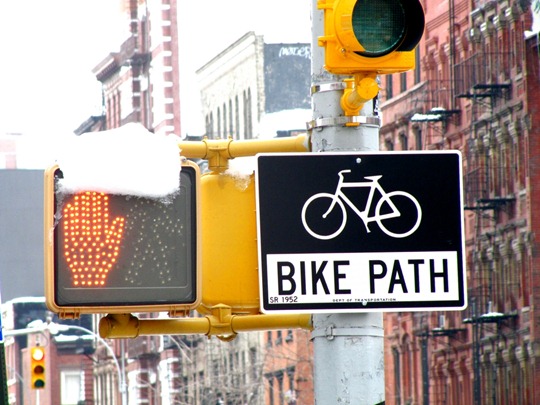 This past weekend I took a trip down to New York City with a few friends. More than a foot of snow was dumped down on the city the day before our arrival.

Given that we are now in the middle of a similar snowstorm here in Toronto, I thought it would be prudent to share some photos of how New York handles large volumes of snow.

Many (but not all) bike lanes seemed to be mostly cleared in Manhattan. I wandered around the city by foot, so I didn’t end up using any of the city’s new infrastructure this time around.

One thing that stood out for me this year is the vast number of food delivery men riding bicycles around the city. Most small take-out restaurants seem to have these delivery bicycles on premises – many of them equipped with large front baskets.

I can’t say if this is a new pragmatic, cost-saving measure that many small eateries are taking due to a tough economic climate, but everywhere I looked I noticed delivery men on bicycles. And why not? Bicycles are far more cost effective and efficient than automobiles.

One such deliverymen was sadly mowed down by a drunk driver in a hit-and-run on 8th Ave on Friday night. I was in a lounge directly in front of where the collision took place and I watched the FDNY and NYPD working hard to save this man’s life and unpin him from a BMW SUV.

The man was hit from behind by a drunk driver in a Lexus – smashing the passenger side of the front windshield before becoming pinned under a nearby SUV. The Lexus driver left the scene but police caught up to him a few blocks away in the congested New York City traffic where he then tried to run from police on foot.

The driver – identified as 40-year-old midtown resident Clark Gettinger – a man who is listed as a former client of Bernie Madoff – has been charged with Driving While Intoxicated, Vehicular Assault and Leaving the Scene of an Accident and was set free on a $50,000 bail.

The 28-year-old delivery man is currently in critical condition, but hospital officials say the man is expected to die. My thoughts are with the man and his family and I hope he proves the hospital wrong.

I took this picture on my phone on Friday shortly after they took the man away to the hospital. You can see the crushed rear wheel of the bicycle and the BMW SUV he was pinned under: 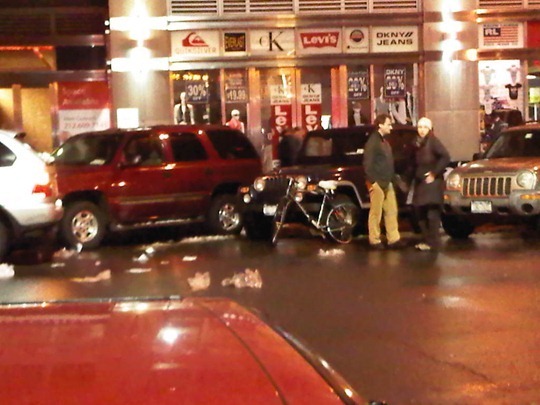 While the deliveryman struggled for his life in the hospital, the rest of Manhattan was dealing with the aftermath of Thursday’s snowstorm. I snapped the following random photos to illustrate how quickly the city was able to clear the snow (with some help from the sun): 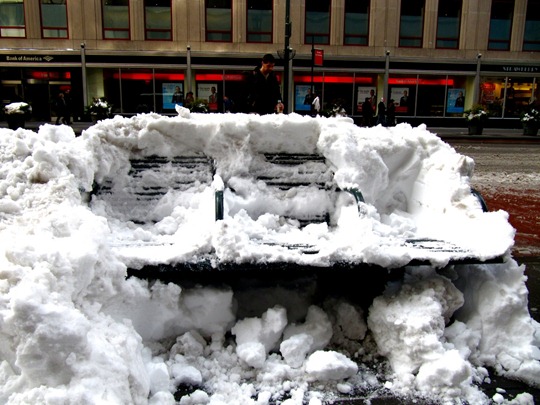 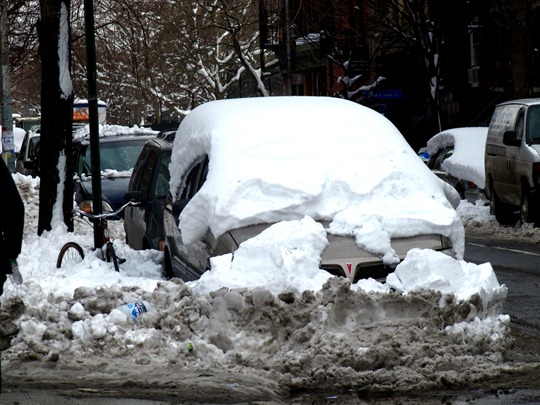 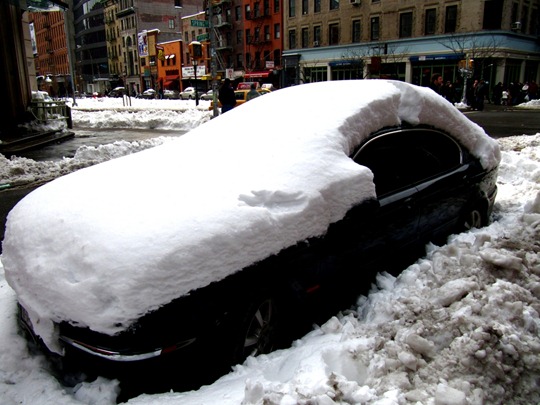 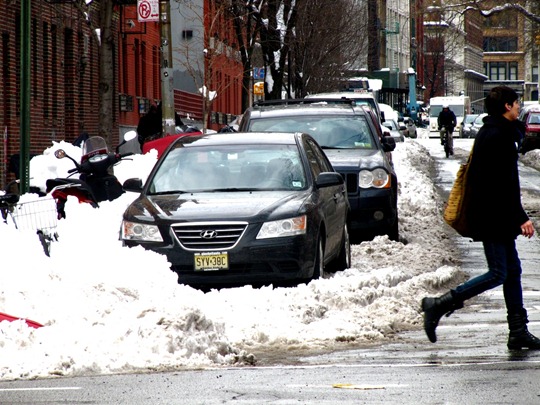 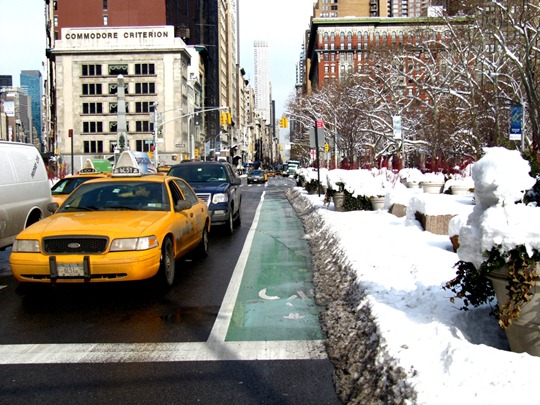 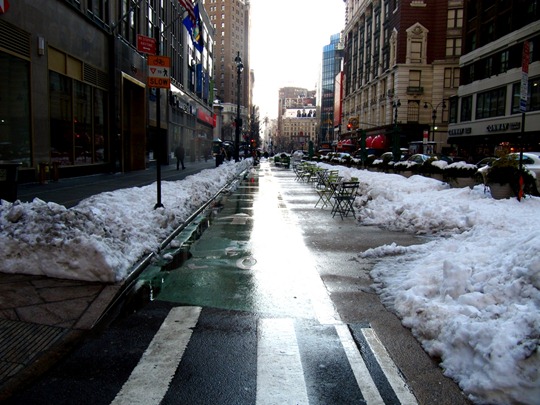 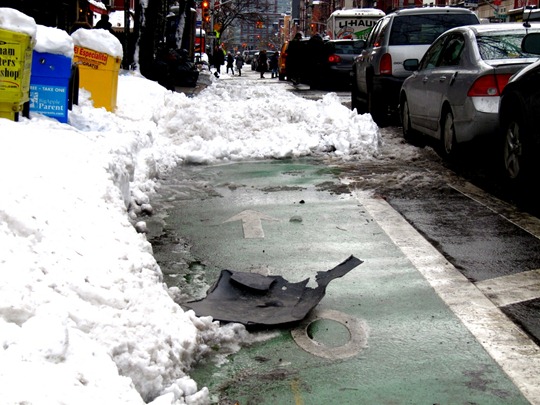 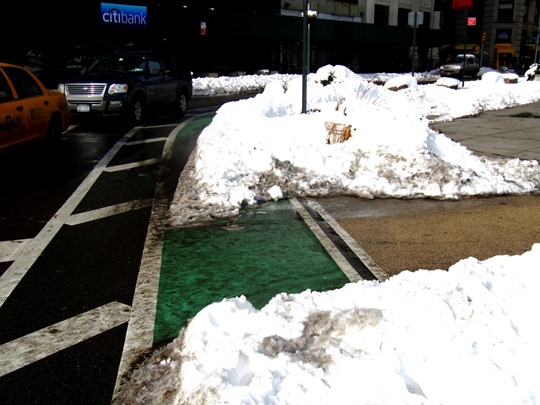 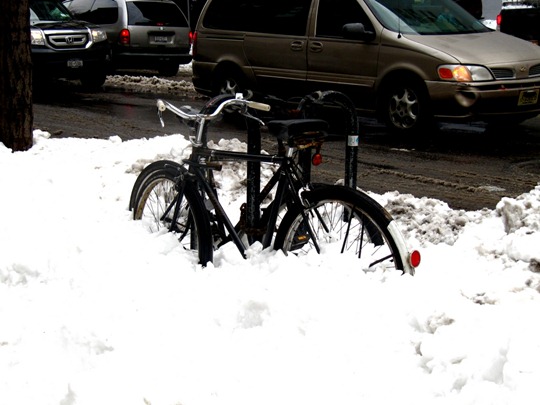 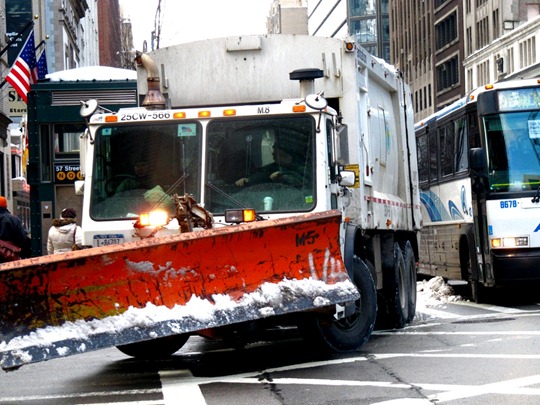 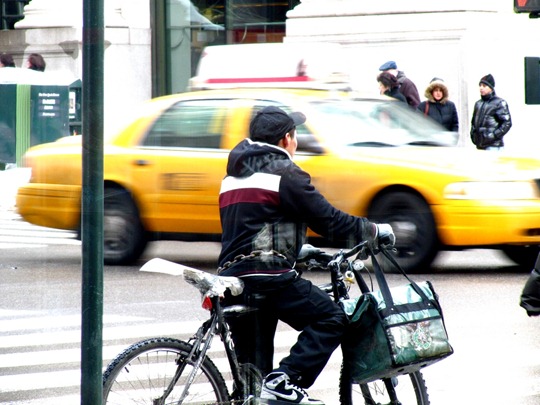 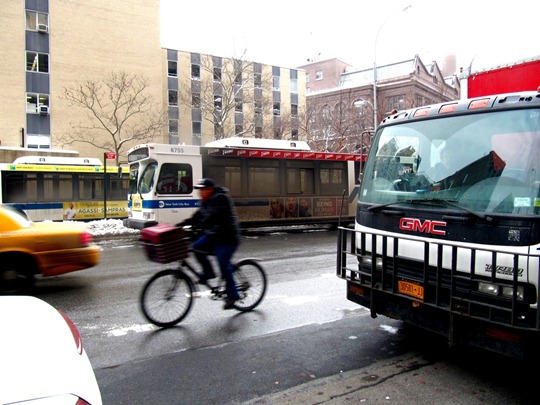 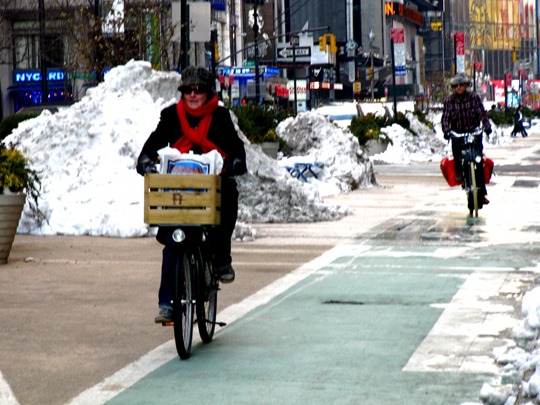 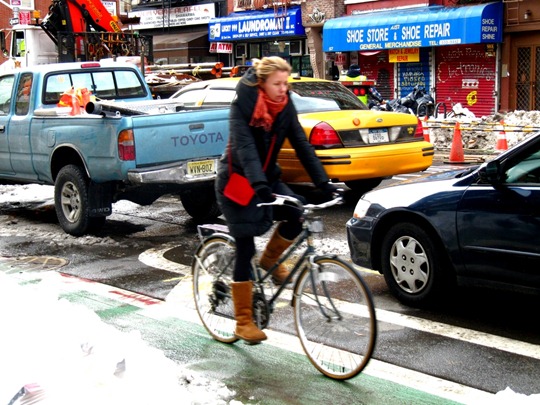 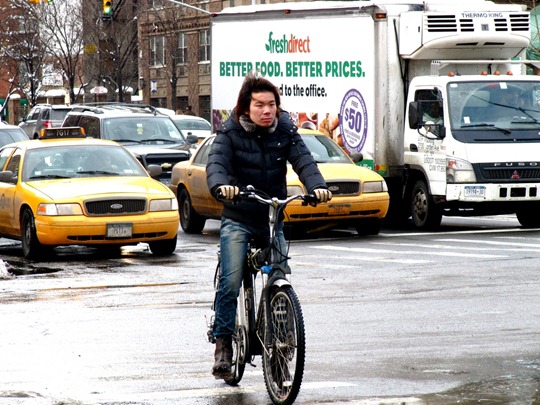 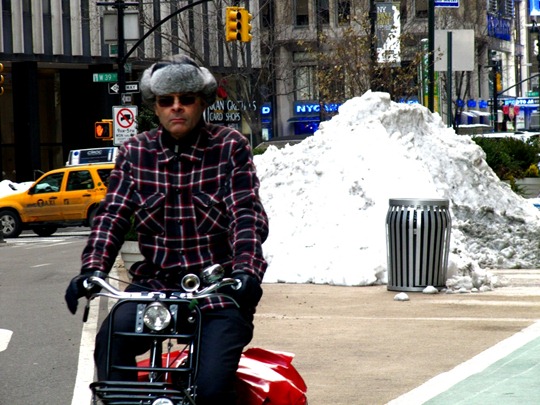 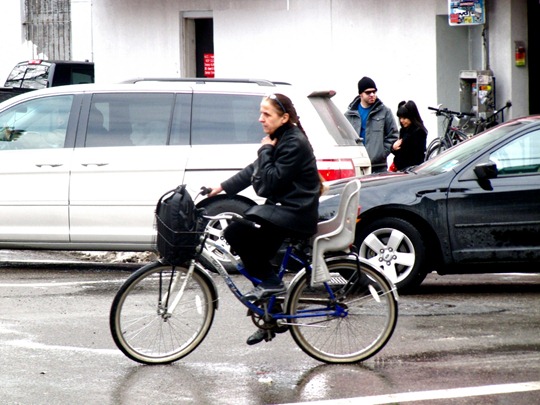 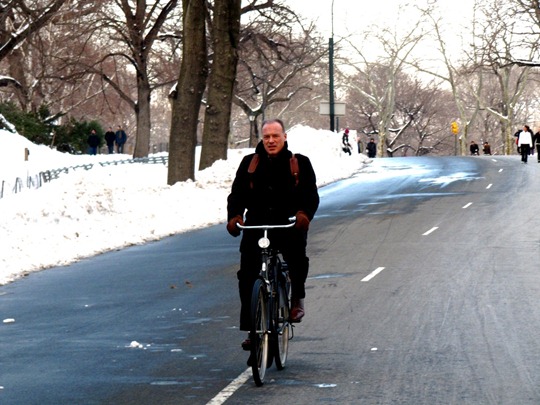 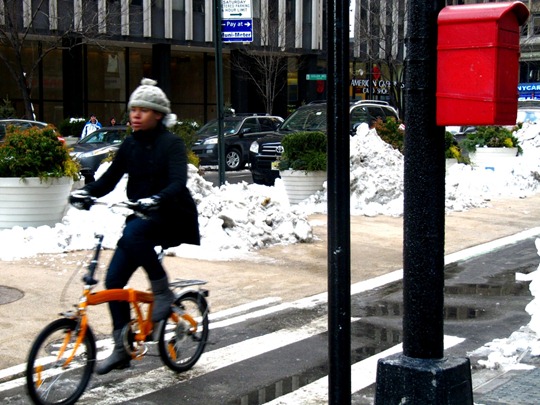 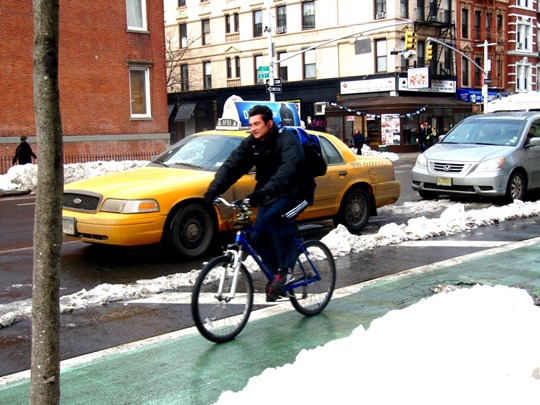 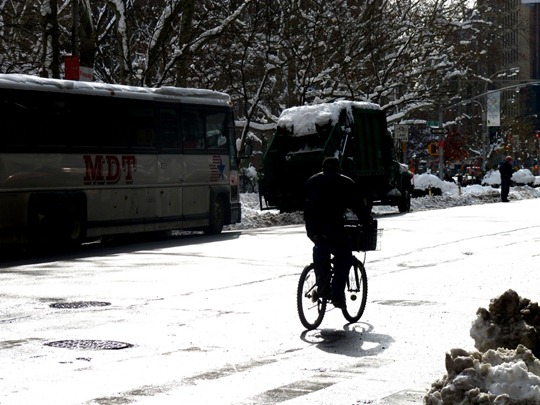 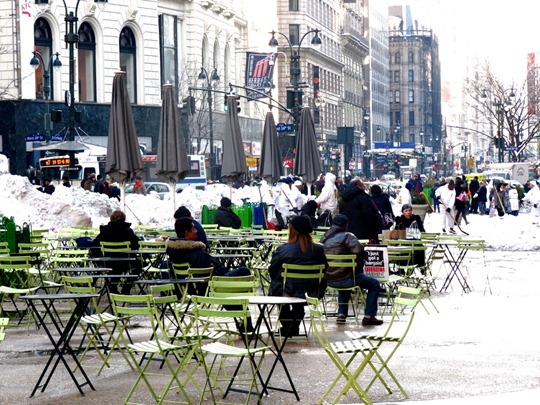 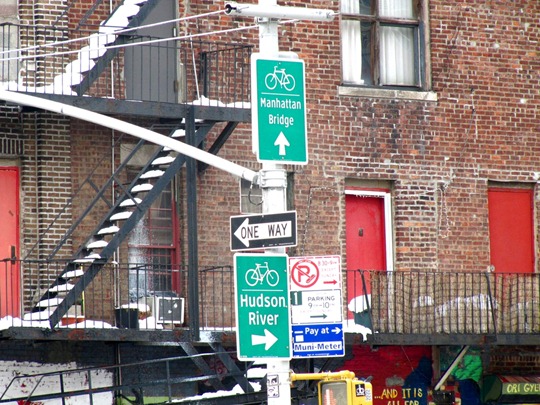 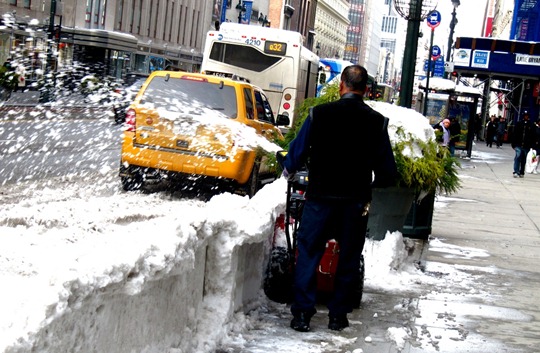 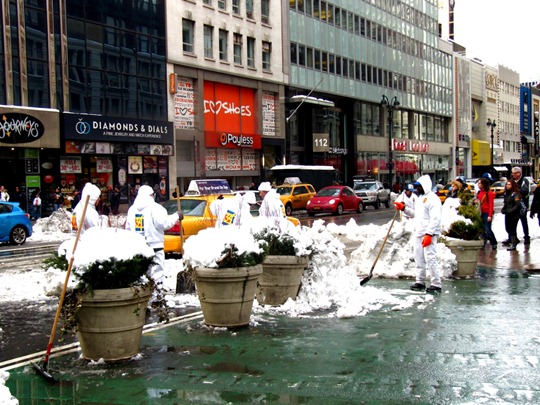 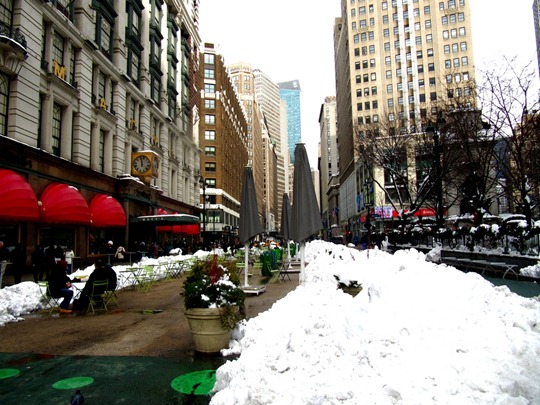 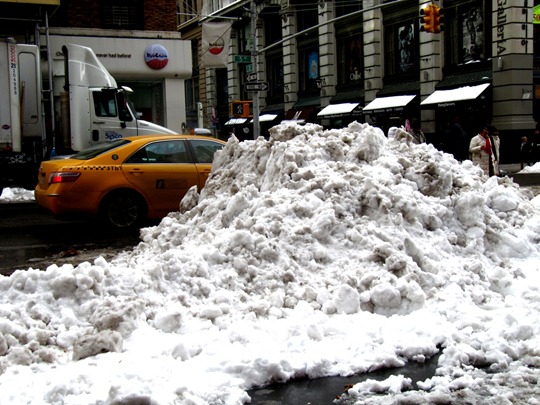