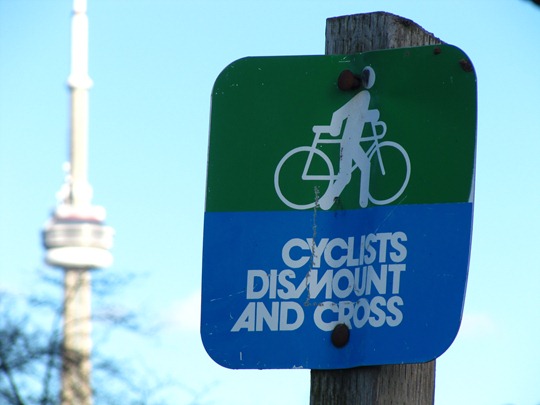 This website normally focuses on the positive things happening around the world with respect to improving conditions for urban bicycling. This post however is going to focus on the negative aspects that we see in many North American cities that end up stifling urban bicycling.

In countries like the Netherlands or Denmark – with established urban bicycling cultures, you will seldom encounter obstacles that are designed to discourage you from bicycling. But here in North America, there are plenty of laws, signs, and infrastructure that make it inconvenient to ride a bicycle.

A prime case in point is the fact that my condo building doesn’t allow bicycles on outdoor patios, or inside the building or on elevators. It also prohibits bicycles from being parked in the parking garage beside automobiles. Thus, it’s no wonder that most residents in my building take public transit, walk, or drive to work.

The rules don’t stop there. Cities have municipal/provincial laws, signs and terrible infrastructure scattered across our city that can make it uncomfortable to ride a bicycle, thus tempting people back on to public transit or their automobiles.

Some of these rules make sense:

HTA 178(1) – Attaching to a vehicle – You are not permitted to attach yourself to the outside of another vehicle or streetcar for the purpose of “hitching a ride.” Set fine: $85.00

Other laws are just asinine:

Unable to keep both hands on handlebars ($8.75 fine)

To highlight some of the obstacles that we face here in Toronto, I gathered some photos of signs and bad infrastructure that I have encountered around the city. Most of these photos are simply a result of bad urban planning.

Here is a sign that reminds bicyclists that they too must stop. I’d like to see a reminder to motorists that the sign applies to them. Because just like bicyclists, many drivers don’t stop at stop signs either: 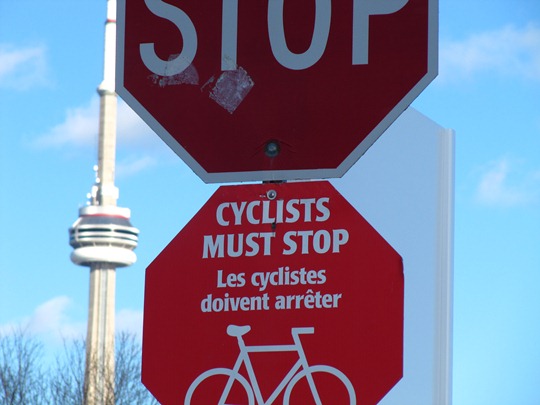 These “cyclists dismount” signs are all over the city. I have yet to see anyone actually dismount (including myself): 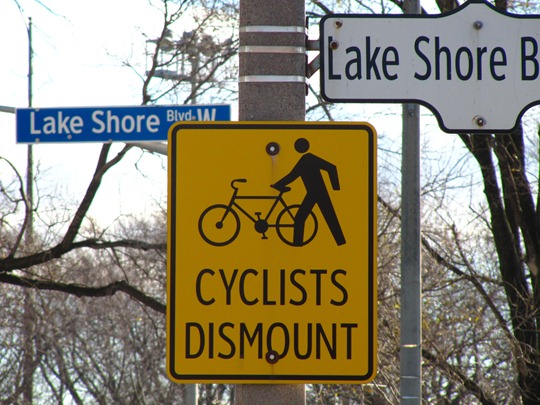 This sign indicates to bicyclists that they need to walk their bike 60 metres where the trail will resume (thankfully the city built a new trail in 2010 that bypasses this section of the trail): 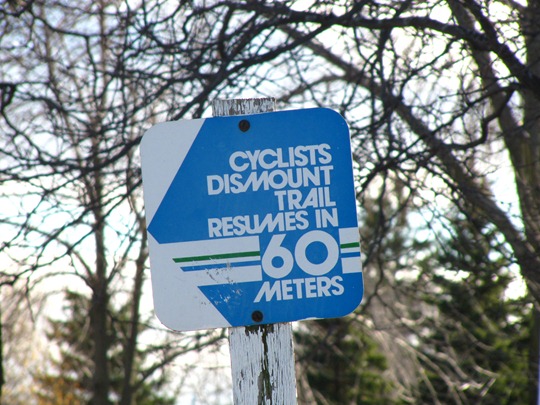 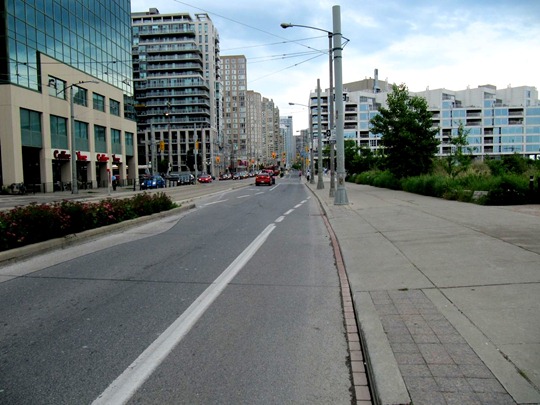 Bicyclists must squeeze into the lane with cars: 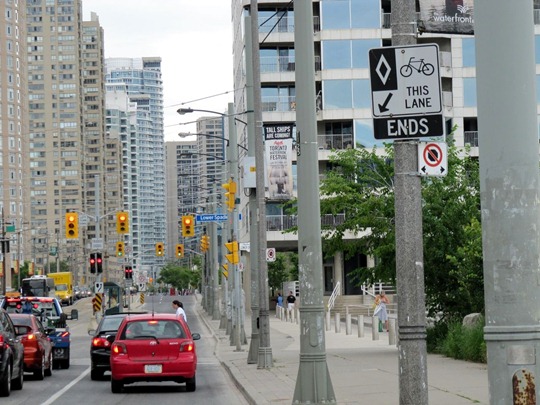 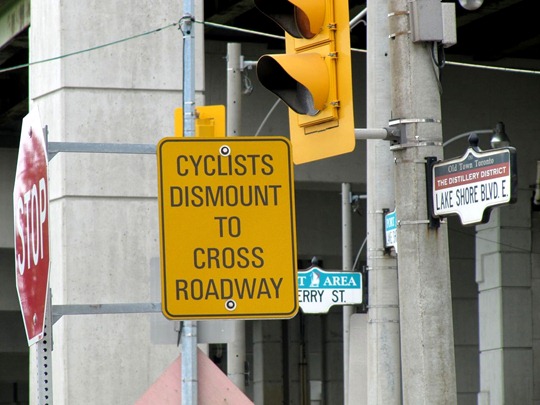 This is a marked bicycle route. Usually bicycle routes are quiet, safe streets. However, this route goes through a nasty dark tunnel (without a bike lane): 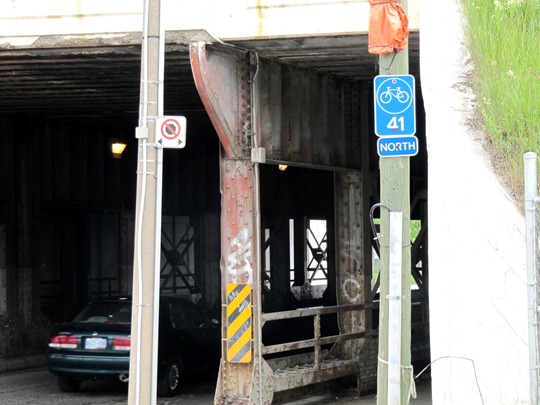 And when you emerge to the other side, there are dump trucks and potholes everywhere: 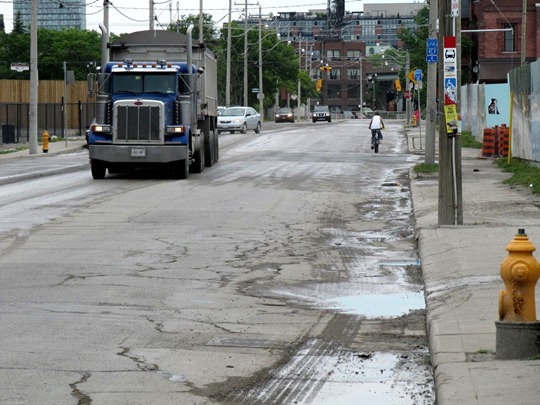 This is my favourite sign. The bicycle route continues 75 metres to the left. However, you aren’t legally allowed to turn left. Break the law, or forget about the “bike route”: 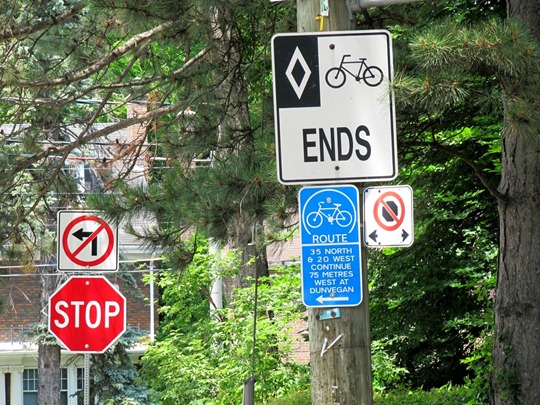 This parking lot (and prime waterfront area) allows neither bicyclists nor pedestrians: 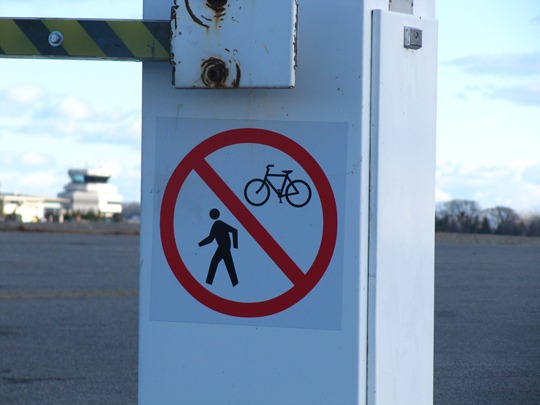 Many bike lanes in Toronto put bicyclists in the “door zone” of parked automobiles: 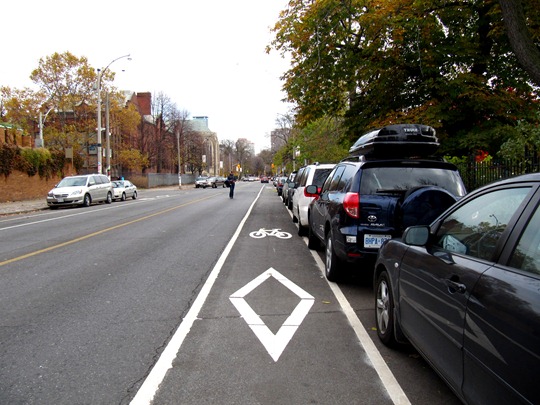 To end this post on a positive note, things could be much worse: we could be stuck in this mess: 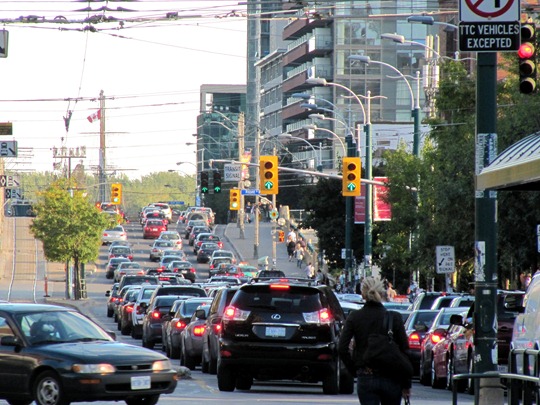