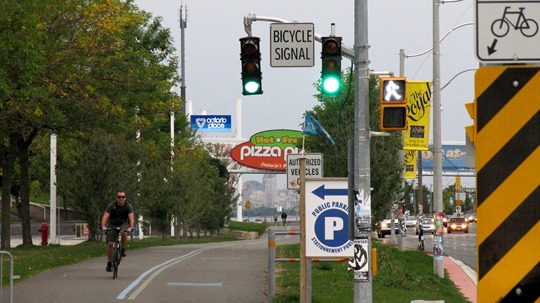 Cities that are more bicycle-friendly implement bicycle traffic signals to reduce the probability of conflicts between motor vehicles and bicycles.

In New York, you can see in the following video I recorded earlier this year that left-turning vehicles are required to wait until bicycle traffic is stopped. This prevents cars from crossing in the path of bicycles.

* New York is far from a bicycle-friendly city, but they have made drastic improvements since Janette Sadik-Khan took the reigns of NYC’s Department of Transportation.

These signals are all over the Netherlands and Denmark to prevent right-turning automobiles from crossing bicycle traffic.

Here in Toronto, we have bicycle signals on some cycle tracks, but they are synchronized with the motor vehicle traffic signals and pedestrian signals, so there is little benefit to having them.

Furthermore, the onus is on bicyclists and pedestrians to watch out for turning automobiles – not the other way around. 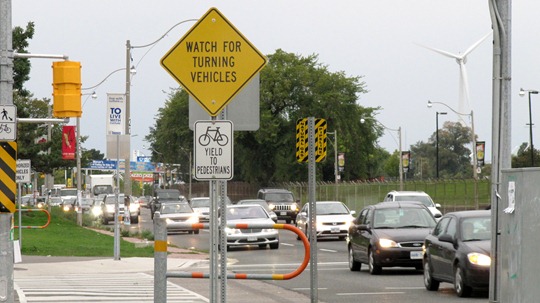 I couldn’t find a sign to warn drivers to watch for bicycles and pedestrians. But then again, most motorists probably wouldn’t see it while being distracted by changing radio stations, text messaging, drinking coffee and applying makeup.

These distracted motorists must first cross the pedestrian path and then the bicycle path. This is extremely dangerous because it’s very hard for motorists to see bicycles approaching the intersection – especially if they are riding at a good speed.

Here is a shot from further back – approaching cyclists are in the driver’s blind spot: 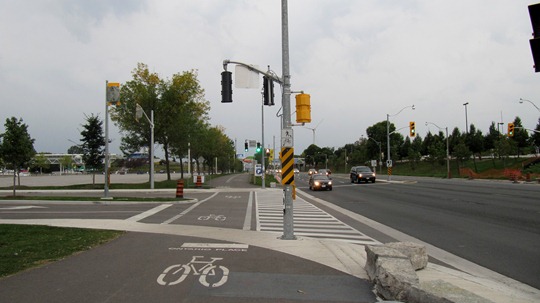 Here’s a video that shows bicycles crossing a Netherlands intersection – free of turning automobiles (in the rain no less):

And David Hembrow recently posted the following video on his blog that explains how junctions in the Netherlands are designed to prevent conflict between motorists and bicyclists:

Reducing conflict between automobiles and bicycles helps to make urban utility cycling more comfortable and safe. There are plenty of great ideas out there that we can implement here in North America with just a little bit of political will.

Do your part to convince your local politicians to implement infrastructure that makes bicycling safer and more enjoyable.