Dave Matthews’ Bike Breaks Down, Picked Up By Fan 1 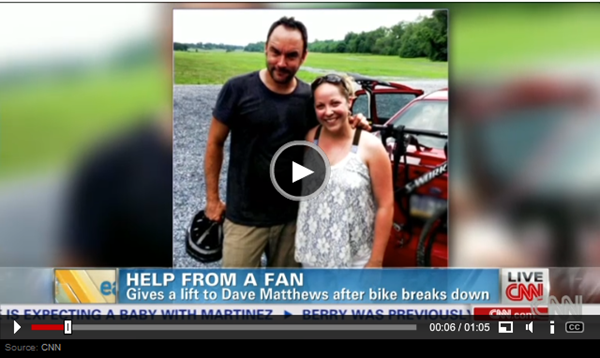 Musician Dave Matthews was out for a bike ride on Saturday shortly before his concert in Hershey Pennsylvania, when his back tire popped, leaving him stranded on the side of the road without a cell phone.

Emily Kraus had been a Dave Matthews fan since she was 9 years old and was on her way to his concert when she encountered a man stranded on the side of the road.

Kraus was shocked to find out it was Matthews’ himself, and gave him a lift to his own concert.

Kraus said she and her boyfriend were running late to the show. But, as she told CNN affiliate WHP, everything happens for a reason.

They spotted a man stranded on the side of the road who looked very familiar.

It was Matthews, his bike broken; he without a cell phone.

Lucky for her, her parents had just recently given her their bike rack. And she offered her idol a ride, to his own concert. 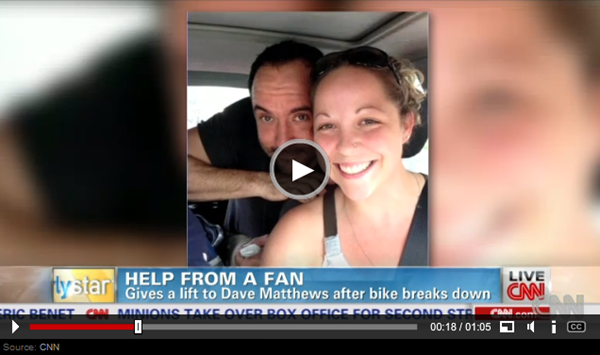 Lovely to see that Matthews was out for a cruise in regular clothes – clearing his mind before performing in front of tens of thousands of fans.

Though I have to wonder if she would have stopped to pick him up if he didn’t look “very familiar”.

Either way, this is a wonderful story and a nice coincidence that she had a bike rack in her car too.

One comment on “Dave Matthews’ Bike Breaks Down, Picked Up By Fan”