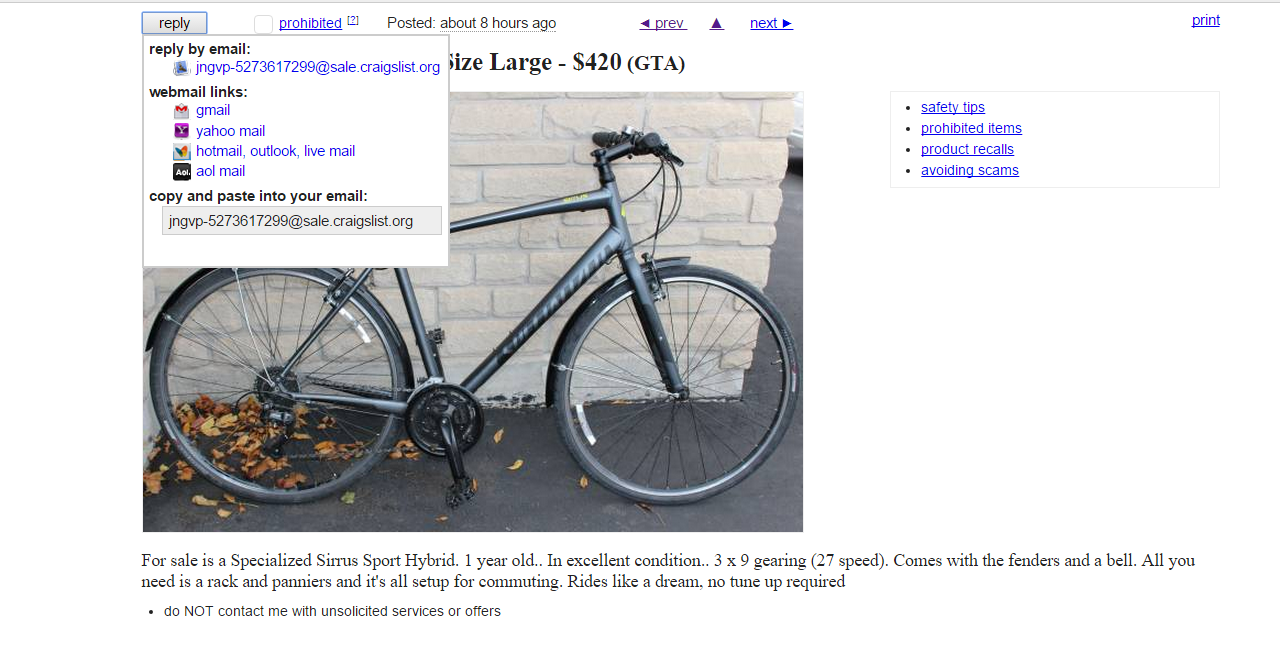 It all started with an instant message from my friend Dylan, who had recently had his bike stolen from downtown Toronto:

“James, look at this. It’s my bike for sale on Craigslist. What should I do?”

Dylan knew that I had a bike blog, and I had dealt with stolen bikes several times before.

The cautious side of my brain told me that he should report it to the police and have them setup a recovery operation to get his bike back. The realistic side of my brain told me that the police aren’t going to do jack shit to help him get his bike back, because they have more important things to worry about (like directing traffic at construction sites).

So I told him he should report it to the Toronto Police first and see if they will do anything about it. If nothing comes out of that, I told him, I would setup a recovery operation to get his bike back.

After about a week passed, and after dozens of follow-up phone calls to see if anything was happening, Dylan grew extremely frustrated that nothing had been done yet. Even after all that time had passed, the police told him that the officer in the plainclothes division who was assigned to the case was away at a conference and wouldn’t be back for a couple days.

Fortunately, the ad was still online, but it appeared that the police weren’t interested in dedicating any resources to helping us get the bike back. Each day that passed increased the chances of the Craigslist ad disappearing.

This brilliant comic, coincidentally, was posted on the same morning this article went live. Courtesy of Kickstand Comics

Against Dylan’s better wishes, I told him that I would put a plan together so that we could safely recover the bike ourselves. I wasn’t going to take any chances after an 18-year-old was killed after using Apple’s Find My iPhone software to trace his lost cell phone. I thought through all the possible scenarios about what could go wrong, and I attempted to mitigate each of those risks through careful planning. There was no way I was going to get shivved or shot over a $700 bike.

So I created a fake email address and sent a message to the seller, asking him if we could meet so I could look at the bike. I also tried to get the seller to give me his phone number so that if the ad went down I would at least have a chance to identify him.

Fortunately, the seller responded quickly and I set up a meeting point in downtown Toronto in a well-lit parking lot in a busy area on King Street West.

To ensure the safety of myself and others, I recruited two friends to stand across the street from the meeting point to video record the event, and I also gave them each U-Locks to defend ourselves if the recovery operation goes sideways.

I equipped myself with bear spray, and Dylan and I agreed that if at any point we feel our safety is threatened, we would get away as quickly as possible and our two friends across the street would call the police.

The plan was for Dylan to act as the prospective buyer and take the bike for a test ride, while I would stay with the seller and make small talk. Dylan was to ride the bike around the block and check the serial number to confirm the bike is indeed his. He would then call me to let me know the serial number matches and I would confront the seller about the origins of the bicycle. If the serial number did not match, he would return the bike and say he is not interested.

But he was confident from looking at the photos that it was indeed his bike. Checking the serial number was just a formality.

I received an email from the seller, letting me know that he had arrived early, and that he was parked in his car with the bike on his rear rack. This was great news, because it gave Dylan and I an opportunity to record his license plate and do a quick walk-by to see if the bike appeared to be his at first glance.

So after a quick walk-by, Dylan was even more convinced that the bike was indeed his.

We gave the signal to our friends across the street to start rolling their video cameras. We were quite anxious at the time because we didn’t know whether we would encounter a gangster or a hipster, or anything else in between.

I double and triple checked that my bear spray was easily accessible in my pocket. Our hearts were pounding as we approached the seller’s driver’s side door. We tapped on the car window, and the seller opened the door and stepped out.

Expecting an intimidating gangster to step out of the car with a thick coat and three guns stuffed in his baggy pants, we were overcome with relief when out stepped a middle-aged lady who was neither intimidating nor threatening, and was actually very cordial and friendly.

She told us she had driven from her sleepy, family-oriented commuter town (Burlington) and that it was her boyfriend’s bike that she was selling for him.

Dylan asked if he could take the bike for a test ride, to which she complied. I made small talk with her and inquired about the bike while Dylan was out for the test ride. I told her that Dylan was looking for another hybrid bike because his was stolen recently.

At first she was very empathetic about his bike being stolen. But she probably started to become nervous when Dylan was taking a bit too long on the test ride, and especially after I told her that the bike that was stolen from Dylan was awfully similar to the bike she was selling.

Then I received the phone call from Dylan. He confirmed that the serial numbers matched.

I then explained to her that she was in possession of Dylan’s stolen bike, and that we would be willing to go to the police station to take this up with the police if she would like to.

She became visibly upset (but not towards us). She told us she had bought it from a guy she thought she could trust, and she was clearly unhappy about the prospect of being out the $200 that she paid for the bike.

15 minutes later, we showed up at the police station. Convinced that she thought better of the idea and hightailed it back to Burlington, we were pleasantly surprised when she walked through the door a few minutes later.

The officer who was in charge of Dylan’s case took us aside and verbally berated us with some choice curse words about how idiotic it was for us to “take the law into our own hands” without letting the police do their jobs. “You could have gotten yourself shot”.

Our response (paraphrased): Well, when the fuck were you going to do something about it? We gave you a week and absolutely nothing happened.

The officer was clearly unhappy with what we did, but I really didn’t give two shits. I knew that we thought it out thoroughly and minimized the risk of something happening to us.

So there it is. Another happy ending to yet another bike theft.

If anyone else has any other stories about recovering a stolen bike, please email me at james.schwartz@theurbancountry.com to have yours featured on The Urban Country.