US House members have approved a constitutional amendment to ban flag burning. The bill will be passed to the senate for voting and there is a good chance it will pass the senate.

It would give Congress the power to ban desecration of the American flag. In 1989 the Supreme Court ruled that flag-burning was a protected free-speach right, so this bill will overturn that decision.

If the bill is passed, the American government will be one step closer to replacing the bible with American history books in all churches in the US. Then the next step will be to ban all critisism of the American government, and we might even see a new bill that bans Americans from getting married to descendents from countries that are non-US allies. 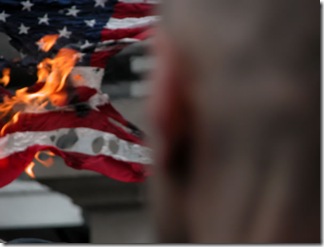