I just arrived in the beautiful city of San Diego, California. It has been quite a long haul the last couple days. I’m testing the threshold of the human body to see how much it can withstand. I worked 12 hours yesterday, then went home to do my laundry. After my laundry I went out with some friends around 11:30 (Cousin Geoff, Constantine and the crew) and didn’t get home until about 5AM (I wanted to pull an all nighter since I had an early flight this morning). I packed in about 10 minutes flat and rushed to the airport to catch my 8:00 flight to LA. I landed in LA around 10AM LA time (1PM Eastern) and drove a few hours to San Diego. The only sleep I’ve had since Thursday night is when I dozed off on the plane for an hour or so. I woke up with drool on my chin. I’m sure it was entertaining for the nearby passengers. It has been 33 hours since I’ve removed my socks or shoes. It feels fabulous to finally take them off.

Southern California is much more beautiful than I had expected with the mountains, palm trees and the Pacific Ocean. Los Angeles was exactly what I was expecting. 15 lane freeways, millions of houses for miles covered by a beautiful blanket of smog. I took the Interstate down along the coast of the Pacific Ocean and once you leave the LA area, the scenery is amazing. Houses on top of mountains, palm trees, cliffs, etc. I stopped in a little beach town and saw a fast food restaurant called “FatBurger”. That’s quite the marketing idea. It didn’t look too busy.

San Diego looks like an amazing city so far. After I shower and clean up I’m going to go wandering without aim around the downtown core. 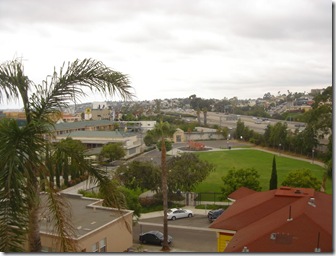 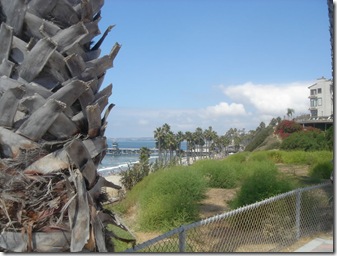