The US recently expedited a shipment of precision bombs to Israel as a result of the attacks on Lebanon. The shipment is a result of a multi-million dollar deal that the US made with Israel last year where Israel can “draw on as needed”. In an attempt to show that the US doesn’t favour Israel over Arab countries, the US also announced a 6 billion dollar deal for military equipment with Saudi Arabia.

Lebonese professor As’ad AbuKhalil from California State University believes that the attack on Lebanon was not a spontaneous act by Israel, but a long-planned mission to enforce UN resolution 1559 to disarm the Hezbollah. He also believes that as a result of the aggression, new groups will be born out of the “agony of the Lebanese population“. Says AbuKhalil: “they will certainly exact revenge, against Israel, against America and against all those who supported this aggression, and when that occurs, the American population, as always, and the media will say in innocence and wonder yet again, “Why do they hate us? What have we done to them?”

Here’s an interesting CNN transcript from Anderson Cooper in May 2003 where he talks about the possibilities of the US extending the Iraq war to attack the Hezbollah in Lebanon.

And here’s a CNN transcript where they quote the President of Pakistan Gen. Pervez Musharraf in November 2001 talking about terrorists.

Musharaff: “Consider the analogy of a tree. Terrorists are like so many leaves. You take out some, there will be plenty more, and an unending growth. Terrorist networks are branches: You prune a few, and there will be others and more growth. The only way to go is to go for the roots. Eliminate the roots, and there will be no tree. The roots, Mr. President, are the causes which need to be addressed, tackled and eliminated fairly, justly and honorably.

I like this analogy, yet so many people still think that more violence will put an end to terrorism. History would seem to indicate that it’s quite to the contrary. 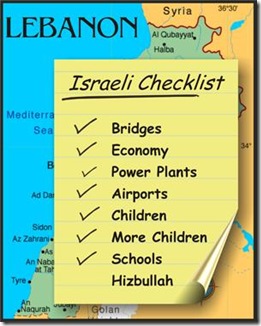 Image “borrowed” from “From Israel to Lebanon“.