With former President Jimmy Carter calling the Bush Administration the “Worst in history”, I figured today’s topic should relate to the war in Iraq. A lot of my readers credit me for complaining about the U.S. involvement in Iraq, but like many other people covering Iraq, I haven’t provided any alternative solution to the war that the neocons have instigated. On a related topic, we’ve seen the famous neo-conservative Paul Wolfowitz crash and burn at his post as the head of the perfidious World Bank.

On one side of the flank, we have the Democrats pushing for a complete withdrawal from Iraq by the end of 2008. On the other side there is the “stay-the-course” attitude where Republicans are completely unwilling to set any kind of withdrawal date. The Republicans have good reason for their stance: They started the mess; they have manufactured the chaos, so they have every reason to avoid a withdrawal. A withdrawal will strengthen al Qaida and the anti-American terror groups and Iraq will fall into a full blown civil war with a possible outcome that would be unfavourable to the United States.

Look at what happened after the Soviets left Afghanistan in 1989. Afghanistan battled in a civil war, the Soviet Union collapsed and al Qaida eventually used Afghanistan as a save-haven to train its fighters. Then we have September 11th, and of course the rest is history.

The Democrats don’t have a solid plan either. To withdraw and let the Iraqi’s deal with the chaos is a big risk for the United States. A civil war in Iraq could have a number of different outcomes; Iran would most likely be involved, and it would likely take many years or possibly several decades to re-stabilize Iraq. The United States will lose its influence in the region, oil exports and global prices would be compromised, and peace would be difficult to achieve.

Why do you think George H.W. Bush decided to withdrawal his troops in 1991 before going after Saddam? Dick Cheney sums it up in his comments to the Discovery Institute in Seattle way back in 1992 after the Gulf War (He’s since then obviously flip-flopped on this topic):

“I would guess if we had gone in there, I would still have forces in Baghdad today. We’d be running the country. We would not have been able to get everybody out and bring everybody home.”

“And the final point that I think needs to be made is this question of casualties. I don’t think you could have done all of that without significant additional U.S. casualties. And while everybody was tremendously impressed with the low cost of the (1991) conflict, for the 146 Americans who were killed in action and for their families, it wasn’t a cheap war.”

“And the question in my mind is how many additional American casualties is Saddam (Hussein) worth? And the answer is not that damned many. So, I think we got it right, both when we decided to expel him from Kuwait, but also when the president made the decision that we’d achieved our objectives and we were not going to go get bogged down in the problems of trying to take over and govern Iraq.”
Dick Cheney, 1992, (From the Seattle Post-Intelligencer)

Back in 1992 Cheney didn’t think Saddam was worth the casualties. But he seemed to grasp the consequences of ousting Saddam where he mentions not wanting to get “bogged down in the problems of trying to take over and govern Iraq”. This is precicely what is happening now, and most neo-cons appear surprised that it happened this way. If you look at the history of these types of wars, this should have been expected.

After World War I when Britain attempted to establish a mandate in Iraq, they were met with resistance and casualties and costs were too high to sustain (Sound familiar?). The British decided instead to grant a pseudo “independence” to Iraq to govern its own territory (which was basically created out of 3 separate Ottoman provinces). Britain, in return would be granted the ability to setup a military presence in Iraq and Iraq foreign policy would favour Britain’s interests. Iraq went through a lot of turmoil while establishing itself as a nation.

Now Iraq is back in turmoil again and I think a U.S. presence in Iraq is only fuelling the fire so to speak. I personally think that the U.S. needs dialogue and some sort of diplomatic relationship with Iran. I also think they need to withdrawal from Iraq within 2 years and spend more energy on dialogue with the neighbouring countries to help broker peace. Since most of the deaths happening in Iraq right now involve Iraqis killing Iraqis, the United States has an opportunity to gradually withdrawal within a couple years. The concern I have is whether a withdrawal of the United States will cause total chaos, or whether it would help to reduce the violence. I think the violence would spike after the withdrawal, but it would eventually come back down and after some time we would hope that the Iraqis would be able to maintain order while the government works to win over the hearts and minds of the people.

Here is a note I found on Wikipedia written to President Bush from Condoleeza Rice on June 28, 2004 with Bush writing “Let Freedom Reign” as a response to Condi’s letter: 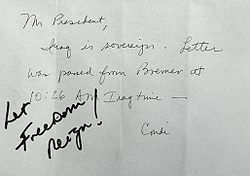