The other week I was sitting on a bus in Chinatown preparing to depart to Niagara Falls for the day. Out of nowhere, a group of 50 or so completely nude cyclists rode right past us, while being escorted by uniformed Toronto Police Service cyclists.

It was a sight to see; people of all shapes and sizes racing down Spadina Ave. You know what Jerry Seinfeld says about naked people: There’s good naked and bad naked. This definitely fell under the “bad naked” category. I think the only way it could have been attractive is if an attractive nude person was riding a bike slowly with grace. These people were pedaling as fast as they could, so you could just see parts bouncing around everywhere. Not cool Timmy. That is not cool.

At first it was shocking to see this spectacle, but I learned after-the-fact that this is an annual bike ride officially known as the “World Naked Bike Ride (WNBR)“. These nudists are raising awareness about automobile pollution and the dangers faced by cyclists and pedestrians.

Maybe some day you’ll see me let it all hang out and take part in this bike ride. 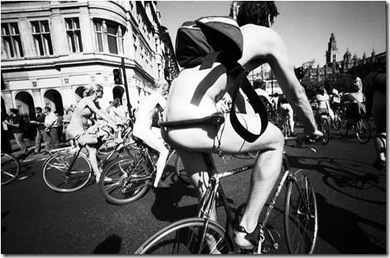